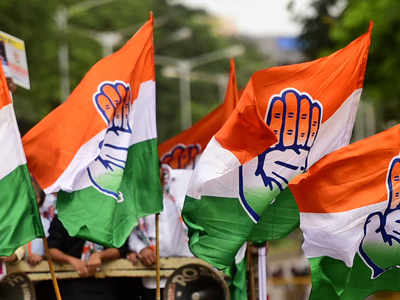 ‘Bahubali’ Modi Government writes a cruel ‘black chapter’ against India’s agriculture, farmers, farm laborers and Agricultural Produce Market Committees (APMC). The draconian laws on agriculture will be a death knell for the future of farming in India.

BJP Government is hell-bent upon destroying the ‘Anndata’ farmer and bartering the agriculture at the altar of a handful of crony capitalists. 62 crores farmers and farm laborers are agitating across India. Over 250 farmers organizations are sitting in Dharna, on hunger strikes and are demonstrating across the length and breadth of India. Drunk with power and determined to serve the crony capitalists friends, Prime Minister Shri Narendra Modi continues to be blind to the agony of the farmers and suppress every voice of protest. Modi Government is dictatorially subverting the voice of farmers’ representatives inside the Parliament and has unleashed a draconian ‘Lathi-Danda Regime’ on the protesting farming community.

PM Modi used the same specious arguments for bringing the three ordinances for doing away with the ‘Right to Fair Compensation’ law championed by Congress Party and Shri Rahul Gandhi. Travesty of justice is being replayed by the BJP while bringing the three anti agriculture laws, aimed at abolishing the livelihoods of farmers.

The interest of farmers & farm laborers cannot be subjugated and be subservient to the draconian majority of BJP in Parliament. Indian National Congress shall continue to take on the dark design of a draconian, dictatorial and anti farmer Modi Government, both inside and outside the Parliament, both from the Parliament to the towns and villages of India. We shall continue voice the pain and suffering of teeming millions. Our protests against the ‘New Enslavement’ of Agriculture by Modi Government are:-

Firstly, Abolishing the system of Grain Market-Vegetable Market i.e. APMC will totally destroy the ‘Agriculture Produce Procurement System’. In such a scenario, the farmers will neither get the ‘Minimum Support Price’ (MSP) nor the price of their crop as per the market price. The true example of this is NDA ruled state of Bihar. In the year 2006, APMC Act i.e. Grain Markets were done away in the state. Today, the plight of farmers in Bihar has gone from bad to worse. Agents are purchasing the crops from the farmers at throw away prices and selling that crop in the other states at MSP garnering huge profit margins to themselves. In case, the Agriculture Produce Marketing System is scrapped throughout the country, the farmers- farm labourers would be the biggest loser and a handful of capitalist will make huge profits.

Secondly, Farmers get remunerative prices for their produce near their agricultural fields at grain market-vegetable market through community organisation of farmers and mutual competition among the customers in the markets. In the market, pre-determined ‘Minimum Support Price’ (MSP) is the benchmark to decide the price of agriculture produce. This is the only measure for the ‘Price Discovery’ i.e. price determination for the farmer’s produce on the
community basis. Grain-Vegetable Market System is the guarantee of fair prices, accurate weight and sale of farmer’s produce. If the farmer’s crop instead of being sold in the market on Community Purchase basis, is purchased at the agriculture field itself, in that case the farmer will loose the power of price determination, weight and bargaining for prices. Naturally, the farmer will suffer the losses.

Thirdly, The Modi Government claim, that now the farmer can sell his produce anywhere in the country, is a white lie. Even today, the farmer can sell his produce in any state. But, what is the factual truth? As far the agriculture census 2015-16, 86 per cent of farmers in the country own less than 5 acres of land. Average land holding is 2 acres or less than that. In such a situation, 86 percent of farmers cannot transport or ferry their farm produce to other place, but, have to sell at the nearest grain market-vegetable market. In the event of Mandi System getting abolished, it will directly do a deadly blow to the farmers.

Fourthly, Abolition of Mandi System shall snatch away the means of bread and butter and livelihood of the millions of labourers, commission agents, Munim, loaders, transporters, sellers etc.

Fifthly, with the scrapping of Grain-Vegetable Market System, the source of income of the states will also dry up. States through its earning from ‘Market Fees’ and ‘Rural Development Fund’ undertake infrastructure development in rural areas and incentivise agriculture. For example – Punjab procured 127.45 lakh tonnes of wheat, this wheat season. Punjab earned Rs 736 crores as market fees and an equal amount it got in the Rural Development Fund. Commission agents earned Rs. 613 crores as the commission. These amounts were not paid by the farmers, but, by the Government agencies like FCI and other Government agencies and private individuals, who procured wheat from these markets. With the scrapping of the Mandi System, the source of income of the states will automatically dry up.

Sixthly, Agriculture experts believe that under the garb of the ordinance, the Modi Government actually intends to implement the ‘Shanta Kumar Committee Report’ so that the Government is not compelled to make procurement at Minimum Support Price (MSP) through FCI and thereby save an amount of around Rs. 1 lakh crores annually. This will directly cause adverse effect on the agriculture and farming.

Seventhly, Through this ordinance, there is an intention to render the farmer merely a labourer in their own lands by getting him entangled in the contract system. Does a poor farmer with 2-5 acres of land holding will be able to frame, understand and sign sale-purchase contract with big companies? Clearly reply has been in the negative.

The biggest flaw in the contract farming ordinance is that giving Minimum Support Price (MSP) is not mandatory. When Mandi System is abolished, then farmer will be solely dependent on contract farming and the big companies will decide the price of the farmer’s crop on his field at their own sweat will. If this is not a new ‘Zamindari System’, then what else it can be? Not only this, through contract farming, farmers would be left at the mercy of big companies, courts and bureaucracy in the event of any dispute. In such a scenario, powerful big companies will naturally exercise their influence on bureaucracy and will attack the livelihood of farmers by engaging them in the legal intricacies and earn profits.

Eighthly, Totally lifting the stock limit on the agriculture produce, consumable items and fruitflower- vegetables shall neither benefit farmers nor the consumer. It will only benefit a handful of people indulging in hoarding and black marketing. They will be able to purchase at cheaper prices and then sell at higher prices after holding the stocks of these items legally, for exampleit has been alleged in the 2020-21 ‘Rabi’ report of the ‘Agriculture Cost and Prices Commission’ that the Government hold stocks of pulses after procuring them from the farmers and when
the crop of pulses is about to arrive in the market, then it sells their stock in the open market. As a consequence of this, the farmers were unable to sell their produce of pulses at the market prices. Rs. 2.5 lakh crores pulse scam of 2015 is the living example of this trend, when pulses were imported at the rate of Rs. 45 per kg and sold at the price of Rs. 200 per kg.

When there will be no stock limit, then the hoarders and black marketers will be totally free to fleece the consumers.

Tenthly, These three ordinances are the direct attack on the federal structure of the country. ‘Agriculture and Mandis’ come under the purview of the State Governments under the 7th Schedule of the Constitution, but, the Modi Government didn’t consider it worthwhile to take the state Governments in confidence on this issue. Protection and incentivising agriculture has been naturally the subject under the domain of the states, but, they were not consulted at all. On the contrary, market fees and rural development fund levied for the development of villages and agriculture was done away unilaterally, which is flagrant transgression of constitutional
provisions.

The Anndata farmer and labourers will never forget the conspiracy of the Modi Government to convert ‘the disaster confronting the farmers’ into an ‘opportunity for the capitalists’ under the garb of pandemic. The next seven generations of BJP will have to face the consequences of these anti-farmer misdeeds of the Government.