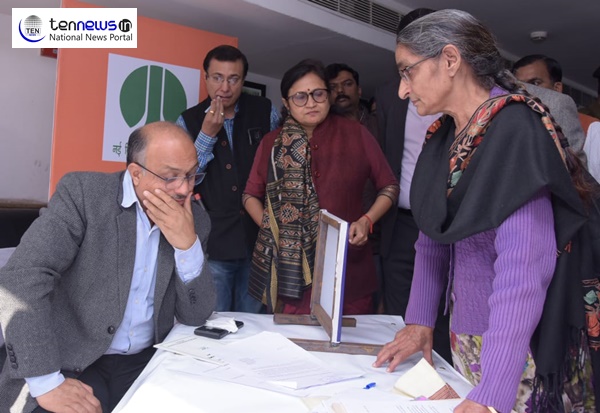 New Delhi (08/12/2018) : Over hundred officers of 20 departments of NDMC were present on the occasion to sort out the grievances across the table in the camp today.

First Suvidha Camp for information, facilitation and redressal of public grievances for NDMC services was organized by the NDMC at its headquarter at Palika Kendra in New Delhi today.

As many as 157 public grievances had been received in person in the camp by the officers concerned of NDMC and out of it, 150 had been resolved on the spot. The most of the grievances of the residents of New Delhi area pertained to the Civil Engineering Department like roads-bylanes, water, sewer, maintenance of parks, and footpaths. The other grievances were of the Tax and Estate Departments.

The seven unresolved grievances were of such a nature, which takes a little more time due to official process. However the complainants were informed about the timeline to sort out such cases.

The Chairman, NDMC, Naresh Kumar and Secretary, NDMC, Rashmi Singh interacted with the complainants in the camp and said that the Council has provided a platform to the citizens of New Delhi area for resolving their grievances on the spot without any delay or any hurdle of official channel. And appealed to the citizens that they should come forward and take the benefit of the opportunity being extended to them on every second and fourth Saturday of every month.

The representatives of Resident Welfare Associations, Market Traders Associations and other residents attended the camp and appreciated the step being undertaken by the Council.