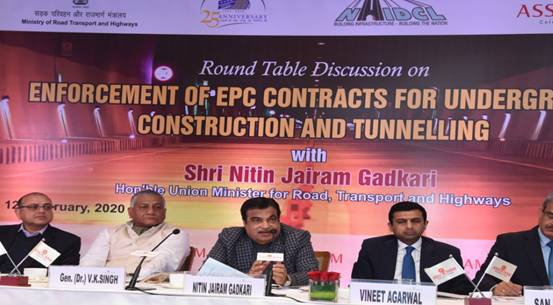 Union Minister for Road Transport, Highways and MSMEs Shri Nitin Gadkari will initiate the first blasting for Zozila Tunnel in J&K tomorrow. The tunnel will provide all-weather connectivity between Srinagar valley and Leh (Ladakh plateau) on NH-1, and will bring about an all-round economic and socio–cultural integration of Jammu & Kashmir (Now UTs of J&K and Ladakh). It involves construction of a 14.15 Km long tunnel at an altitude of about 3000 m under Zojila pass (presently motorable only for 6 months in a year) on NH-1 connecting Srinagar and Leh through Dras & Kargil. It is one of the most dangerous stretch in the world to drive a vehicle & this project is also geo-strategically sensitive.

The project was first conceived in 2005 and its Detailed Project Report (DPR) was prepared by BRO in year 2013 on BOT (Annuity) mode. Attempts to award the project four times weren’t successful. The Project was eventually given to NHIDCL in July 2016 for implementation on EPC mode. Its work was awarded to M/s. ITNL (IL&FS). Prime Minister Shri Narendra Modi laid foundation stone at Leh and commenced the work on 19.5.2018. The work progressed up to July 2019, and thereafter M/s. IL&FS went into financial problems and the project was stuck. Hence, the contract was terminated on 15.01.2019.

Thereafter, in February 2020, Shri Nitin Gadkari, Minister for Road transport & Highways, reviewed this whole project in detail. In order to reduce the cost and to execute the languishing project on priority, referred the matter to an expert group under the Chairmanship of Shri I.K Pandey, DG (RD) & SS, MoRTH. The Expert group suggested modalities of project configuration and implementation, to achieve project completion in least possible time and cost.

After due consultation with tunnel experts and other stakeholders, the expert group submitted its report on 17.5.2020, which was approved by the Minister, RTH on 23.05.2020. The salient features of the report include the following:

Consequent to approval, NHIDCL invited the bids on 10.6.2020. Consequent upon Technical qualification of all three bidders, financial bids were opened on 21.8.2020 and M/s. Megha Engineering & Infrastructure Limited was awarded the work for its quoted rate of Rs 4509.50 crore, and the Letter of Acceptance (LOA) was issued on 25.08.2020.

The capital cost of approach road from Zozila Tunnel to Z-Morh tunnel (18.63 Km) to make the road all weather was worked out to be Rs.2335 Crores as per the DPR. The construction cost of Zozila tunnel was earlier worked out at Rs. 6575.85 Crore and after considering the escalation @ 5% per annum and the total capital cost of the project as Rs.8308 Crore by NHIDCL. Thus the total integrated cost of the project including Zozila tunnel and approaches upto Z- Morh tunnel works out to Rs.10643 Crores. Now comparing to the present cost of the integrated project, based on the tender received at Rs. 4509.5 Crore, the total capital cost of the project would be Rs. 6808.63 crore. Thus, after re-modelling of the project and reaping the benefit of integrated project management by segregating the egress tunnel & utilizing the excavated rock material in construction of approaches, generated from tunnel boring, resulted in an anticipated saving of Rs. 3835 crore besides resolving the issue of muck disposal to a great extent.

Significance of the project:

(ii) The construction of Zozila Tunnel shall bring about all round economic and socio-cultural integration of these regions which remains cut-off from rest of the country during winters due to heavy snowfall for about six months.

(iii) A tunnel in Zozila is the only viable alternative at present for a full year connectivity road. This tunnel when completed will be a landmark achievement in the history of modern India. It will also be of great importance to the Defence of the country, in view of the fact that massive military activities along our borders in Ladakh, Gilgit and Baltistan regions are taking place.

(v) This Project will make the travel on Srinagar-Kargil-Leh Section of NH-1 free from avalanches.

(vi) Project would enhance the safety of the travelers crossing Zozila Pass and would reduce the Travel time from more than 3 hours to 15 minutes.

3.   A telephone shall be installed at the emergency call niches.

8.     Automatic Fire Detection and suppression System in the tunnel

Emergency call niches shall be located, according to the EU standard, in the tunnel at intervals of less than 125 m each to other in the tunnel and in all lay-bys. The emergency points shall have the following equipment:

Uber to offer 30,000 free rides to children in distress across India