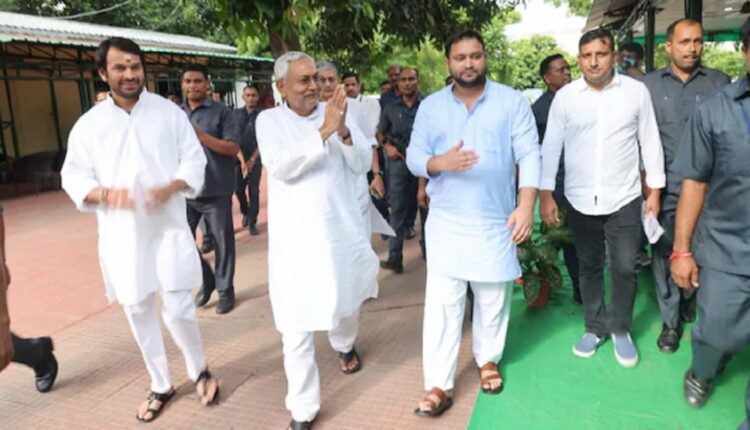 He reached the Raj Bhavan in Patna with the leader of Rashtriya Janta Dal Party, Tejaswi Yadav, and announced his decision to step down. Both were seen leaving for Yadav’s residence soon after. Nitish Kumar reported that this decision was taken by JD(U), following which he decided to break his alliance with NDA.

But when Kumar resigned, he also staked his claim to form a new government with the support of 160 MLAs. Kumar was backed by JD(U) and RJD, led by Tejaswi Yadav, son of former CM of Bihar, Lalu Prasad Yadav.

BJP heavily criticized Kumar for the decision he made and for betraying the party and the people and for joining forces with the RJD-led opposition. Kumar replied that BJP tried to destroy his party several times.

RJD supporters and workers were seen celebrating after Kumar and Yadav staked their claim to form a new government. “Let us forget what happened in the past and embark on a new and stronger journey.”, Kumar said.

Lalu Prasad Yadav’s daughter, Rohini Acharya also tweeted that “get ready for the actual torchbearers of Bihar politics to return.”

Several BJP leaders reported that Kumar’s claim of BJP destroying him and his party is completely false and baseless. Nitish Kumar also spoke with Rahul and Sonia Gandhi, expressing gratitude for their support after he broke his alliance with BJP. Congress is likely to get four ministerial berths in the new government of Bihar.

Nitish Kumar will be swearing in as the CM of Bihar at 2 pm today at Raj Bhavan, making this the monumental 8th time of him taking oath as Bihar CM. Tejaswi Yadav, leader of RJD and supporter of Kumar is said to become the Deputy CM in this newly formed government.