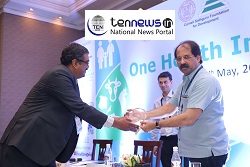 Paving the way towards One Health India

Gurugram: A health summit was organized in Delhi to promote ‘One health’ concept in India.  One health summit focuses on the concept of analogy of human health, animal health, and environment, to protect the health of our planet as a whole.  The two-day summit was inaugurated by Dr S Eswara Reddy, Drug controller General of India and Dr S R Rao, Department of Biotechnology. The summit witnessed the convergence of several eminent academicians, industry experts and participants from the Government of India who deliberated on future road map of One Health.

A significant announcement was made by DCGI on the veterinary medicines cell on the day 1 of the summit which was the requirement of stipulation of withdrawal period of the veterinary drugs used for treatment of food producing animals. The withdrawal period refers to interval between last administration of the drug to animals and production of food stuffs from such animals so as to reduce the residues of the drug below MRL (Maximum Residue Limits).

Speaking on the occasion, Dr. Samar Mahendran, Director, CGS Hospital said, “It was a pleasure to be a part of the One Health India Summit. The triad of human health, animal health, and environment has gained currency in the recent years. It is imperative to save our planet from challenges of climate changes and global warming. Animal health has been adversely affected to due to human developmental activities. Similarly, the human health deserves equal importance which has been relegated to the background due to hectic and fast-paced life.“

Further, Dr S R Rao’s emphasis on DBT’s continued investments in One Health also served as great encouragement for both industry and academia. The summit received an overwhelming response as it serves as the foundational prioritization platform and addressed the fundamental challenges across the one health realm.

Ministry of Steel to set up 20 commercial vehicle scrapping centres across India!