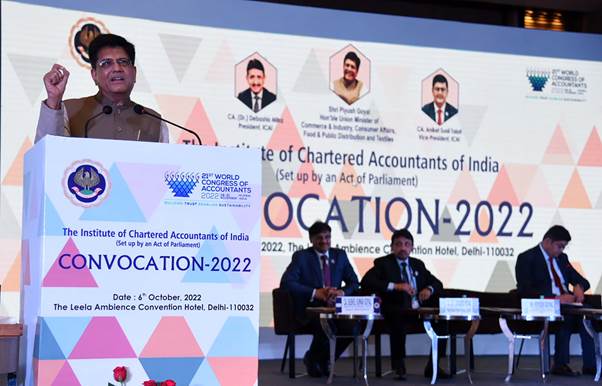 The Minister termed Chartered Accountancy as one of the noblest professions in the world and said that the signature of a CA affixed on a document was a very powerful endorsement of the contents of the document and its veracity, integrity and truthfulness.  Goyal expressed satisfaction at the global footprint of ICAI with over a 168 branches, presence in 47 countries with 77 centers in difference cities of the world. Congratulating ICAI for its efforts to establish a 100 centers world over, the Minister asked the Institute to expand its presence in the continent of South America as well.

The Minister stressed that CAs must always be committed to promoting inclusive growth so that as we progress to being a developed nation, nobody is left behind. We must take along with us every section of the society, the persons at the very bottom of the pyramid, the marginalized sections of the society, he said.  Even the least privileged persons in the nation have the right to a better quality of life and collectively the CAs must work to secure these rights by promoting inclusive development, the Minister added.

Goyal observed that India is now looked upon as the talent factory of the world and said that CAs were among the most competent talent produced by the nation. He expressed confidence that the CAs of India will not only live up to the expectations of their countrymen but also those of the world.

Goyal asked young CAs to explore the paths of entrepreneurship too, along with auditing, accounting, management consulting. He urged Chartered Accountancy Bodies of India to engage more with ‘naari shakti’ or women power and ensure that more and more women become CAs and more and more women join the Council of ICAI to make it stronger and more inclusive.

The Minister spoke of the Panch Pran articulated by Prime Minister Narendra Modi as India celebrated 75 years of independence and said that these principles must guide us during the next 25 years leading up to 100th anniversary of India’s independence. He said that these 5 vows were crucial to Chartered Accountants as well.

Speaking of the first vow of building a developed India, the Minister asked Chartered Accountants to work to bridge the gap between rural and urban India, the developing India and the developed India, the rich and the poor, investors and entrepreneurs and thus empower India to become a developed nation by 2047. Goyal said that PM Modi also spoke of the need to remove the colonial mindset from our day to day life. The Minister said that there are several areas where we must shun the legacy of colonialism and evolve to become contemporary in our outlook.

The Minister asked youngsters to take great pride in India’s rich history, traditions, heritage, culture, its legacy ideals like vasudhaiva kutumbakam and its deep rooted commitment to nature and sustainability. India is a nation that intrinsically believed in sustainability,  Goyal said and added that since time immemorial, our civilization recognized the value of nature and the need to leave behind a better planet than what we inherited. India always recognized inter-generational equity, he underscored.

Highlighting PM Modi’s call for unity, the Minister said that India must present a united face to the world. He asked professionals to be united and organizations to reflect this spirit of unity. India is a proud country with great unity amidst tremendous diversity, Goyal observed. He opined that CAs of the country played a crucial role in promoting the ideals of national integration.

Goyal spoke of PM Modi’s emphasis on ‘kartavya’ or duty and said that the ‘Chartered Accountant’s Oath’ was an excellent manifestation of this concept of duty. “The impressive oath speaks about commitment to excellence, ethics, honesty, independence, confidentiality and integrity. It talks of working sincerely, looks at  a corruption-free India , gives a commitment to corporate governance and aspires for efficient and effective utilization of the nation’s resources”, the Minister said. He applauded the emphasis that the oath placed on values of humility, respect and responsiveness to needs of society.