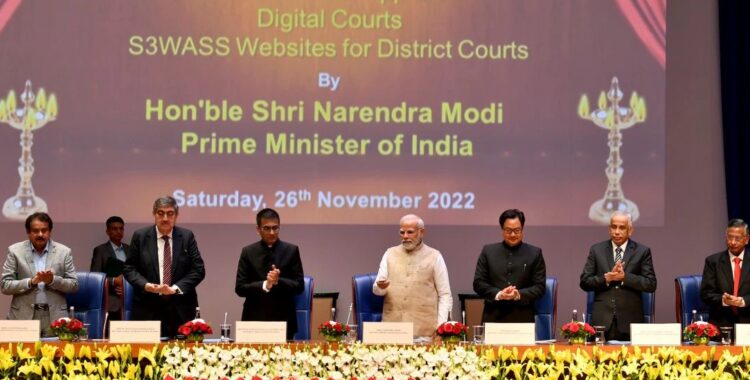 Conveying his greetings for Constitution Day, the Prime Minister recalled that in 1949 on this day, Independent India laid the foundation of a new future for itself. The Prime Minister also noted the importance of the Constitution Day in the year of the Azadi ka Amrit Mahotsava. He paid tributes to Babasaheb Dr B R Ambedkar and all the members of the constituent assembly.

The Prime Minister highlighted the contributions of countless individuals from the Legislature, Judiciary and Executive in the last 70 decades of the journey of development and expansion of the Indian Constitution, and thanked them on behalf of the entire nation on this special occasion.

Remembering the dark day in the history of India when the country was celebrating the momentous occasion of Consitution day, the Prime Minister recalled that on November 26, India faced the biggest terrorist attack in its history by the enemies of humanity. Modi paid his tributes to the ones who lost their lives in the dastardly Mumbai Terror Attacks.

The Prime Minister reminded that, in the current global scenario, the world is looking at  India amidst its growing economy and international image, with hope. He said that defying all the initial apprehension about its stability, India is moving ahead with full force and taking pride in its diversity. He credited the Constitution for this success. Continuing further, the Prime Minister referred to the first three words of the Preamble, ‘We the People’, and said, ‘We the people’ is a call, trust and an oath. This spirit of the constitution is the spirit of India, that has been the mother of democracy in the world”, he said. “In the modern time, the Constitution has  embraced all the cultural and moral emotions of the nation.”

The Prime Minister expressed happiness that as the Mother of Democracy, the country is strengthening the ideals of the constitution and pro-people policies are empowering the poor and women of the country.  He informed that laws are being made easier and accessible for the common citizens and the Judiciary is taking many steps to ensure timely justice.

Referring to his emphasis on duties in his Independence Day speech the Prime Minister said that it is the manifestation of the spirit of the constitution. Terming the Amrit Kaal as ‘Kartavya Kaal’, the Prime Minister emphasised that in the Azadi Ka Amrit Kaal when the nation is completing 75 years of Independence, and as we embark on the journey for the next 25 years of development, the mantra of duty towards the nation is first and foremost. “The Azadi Ka Amrit Kaal is the time for duty towards the country. Be it people or institutions, our responsibilities are our first priority”, the Prime Minister remarked. He underlined that by following one’s ‘kartavya path’ the country can attain new heights of development.

The Prime Minister informed that in a week’s time, India is going to attain the G20 Presidency, and stressed the need to promote the prestige and reputation of India in the world as a team. “It is our collective responsibility”, he added, “The identity of India as the mother of democracy needs to be further strengthened.”

Underling the youth-centric spirit, the Prime Minister said that the constitution is known for its openness, being futuristic and its modern vision. He acknowledged the role and contribution of youth power in all aspects of India’s growth story.

Stressing the need to increase awareness about the Constitution of India among the youth for a better understanding of topics like Equality and Empowerment, the Prime Minister recalled the time when our constitution was drafted and the circumstances that stood before the country. “What happened in the debates of the Constituent Assembly at that time, our youth should be aware of all these topics”, he pointed out. He further added that this will increase their interest in the constitution. The Prime Minister gave the example when India had 15 women members in the Constituent Assembly and highlighted women like Dakshayani Velayudhan among them who came out of an underprivileged society to reach there. The Prime Minister lamented that the contributions of women like Dakshaini Velayudhan are rarely discussed, and informed that she made important interventions on many subjects related to Dalits and labourers. The Prime Minister gave examples of Durgabai Deshmukh, Hansa Mehta and Rajkumari Amrit Kaur and other women members who also made significant contributions to issues related to women. “When our youth will get to know these facts, they will find the answers to their questions”, he continued, “It will build loyalty towards the constitution which will strengthen our democracy, our constitution and the future of the country.” The Prime Minister concluded, “In the Azadi Ka Amrit Kaal, this is the need of the country. I hope this Constitution Day will give more energy to our resolutions in this direction.”

The Project is an effort to provide services to litigants, lawyers and the judiciary through ICT enablement of courts. The initiatives launched by the Prime Minister include Virtual Justice Clock, JustIS mobile App 2.0, Digital court and S3WaaS Websites.

Virtual Justice Clock is an initiative to exhibit vital statistics of the justice delivery system at the Court level giving the details of the cases instituted, cases disposed and pendency of cases on day/week/month basis at the Court level. The effort is to make the functioning of the courts accountable and transparent by sharing with the public the status of case disposals by the court. The public can access the Virtual Justice Clock of any court establishment on the District Court’s website.

JustIS Mobile App 2.0 is a tool available to judicial officers for effective court and case management by monitoring the pendency and disposal of not only his/her court but also individual judges working under them. This App is also made available to High Court and Supreme Court Judges who can now monitor the pendency and disposal of all the States and Districts under their jurisdiction.

Digital court is an initiative to make court records available to the judge in digitised form to enable the transition to Paperless Courts.

S3WaaS Websites is a framework to generate, configure, deploy and manage websites for publishing specified information and services related to district judiciary.  S3WaaS is a cloud service developed for government entities to generate Secure, Scalable & Sugamya (Accessible) websites. It is multilingual, citizen-friendly and divyang friendly.

NCC to celebrate 74th anniversary of its raising; Defence Secretary pays homage to the fallen heroes at National War Memorial