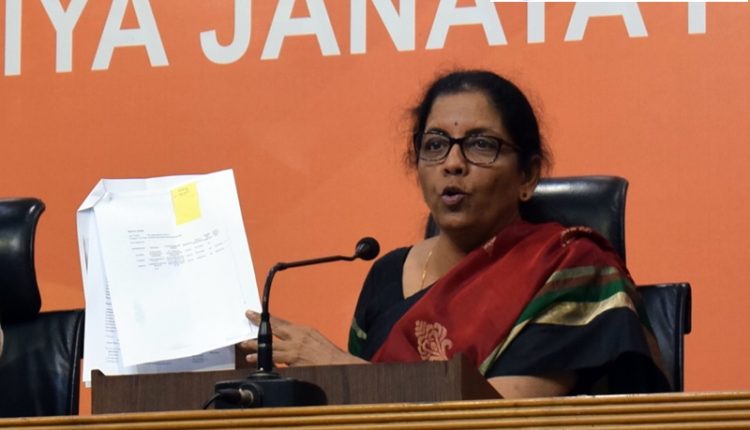 New Delhi: Defence Minister Nirmala Sitharaman on Saturday hit out at the Congress for cornering Prime Minister Narendra Modi led government over the PNB fraud case and said that
Gitanjali Gems was suspended for 6 months from doing business on NSE in 2013. On September 13, 2013, Rahul Gandhi attended a promotional event of this jewellery group.

Defence minister Sitharaman had earlier called the scam a “gift from the previous government”.

Addressing the Media Defence Minister Sitharaman Said, “I’m here as a BJP Worker. We are talking on the PNB Nirav Modi matter. The essential underlying fact i’m telling under a lot of detail. As always congress party indulges in scandalous affairs.GitanjaliGems was suspended for 6 months from doing business on NSE in 2013. On September 13, 2013, Rahul Gandhi attended a promotional event of this jewellery group.

The entire might of the government has been invoked to pin the culprit Nirav Modi in the fraud case immediately after it came to light.
143 LoU’s (Letter of Undertaking) were given to Gitanjali Gems Ltd (Rs 2144 crore), Gili India Ltd (Rs 566 crore), Nakrashtra Brands Ltd (Rs 321 crore) which comes to a total of Rs 3032 crore and 224 Foreign Line Of Credit were given to Indian Banks overseas so that payments could be made to foreign suppliers,” read the complaint- which is a part of the CBI’s FIR. All this happened in 2017-18,” said Defence Minister.

Bonn Announces New Chapter of Growth with the Launch of Six New Variants!