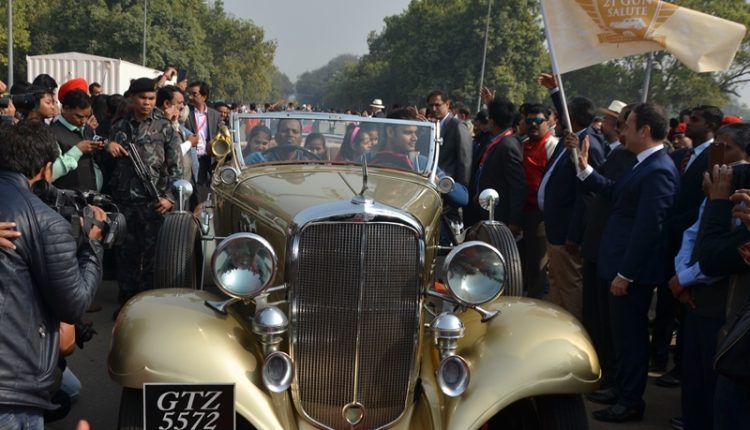 New Delhi: City witnessed the most awaited and historical International Vintage Car Rally and Concours Show 2018 today, where 125 Vintage Cars and 35 Vintage Scooters and Motorcycles participated in the rally begun from the historic India Gate.

Car enthusiastics from the USA, the UK, Australia, Seychelles and Italy took part in the rally which created an international array of what is most refined and most elegant in the field of exceptional motor cars.
Speaking on the occasion, Union Cultural Minister, Mahesh Sharma said, “It is a matter of proud for us that such an international show is being organised in India.”

Following the event, Founder and Managing Trustee of 21 Gun Salute Heritage and Cultural Trust, Madan Mohan said, “Every year, as a tribute to the golden era of the automotive industry, we organize this International Vintage Car Rally and Concours Show. This year we have special entries and esteemed guests from the global motoring brotherhood and have received immense support from the Ministry of Tourism, Govt of India.

This year the show showcased a wider representation of different makes and marques; the oldest Participant being the 1903 Humberette owned by Abbas Jasdanwalla from Mumbai. The event also showcased an array of Rolls Royce cars including the 1908 Silver Ghost, the 1930 Phantom II, the 1938 Phantom m and the 1965 Silver Cloud III, to name a few!

The event also showcased a few last surviving editions, such as the legendary 1939 Delage D-8 from the USA and the 1965 Silver Cloud from the UK. The 1942 Packard 180 Limo the sole survivor of the preworld war Packard’s along with the restored 1938 Armstrong Sidley, previously owned by Maharaja of Kapurthala was also among the head turners.

Besides, the event also took up a social cause of raising funds for the children with special needs.
A bit of magic happened when all these automotive greats paraded from the majestic India Gate towards the Ambience Greens, Golf Course Gurugram, covering a distance of 33 km, the rally passed through many historic points, fleeting through various parts of Lyutens Delhi; the rally started from India gate and moved through the Inner Circle Road. Further following the Raj Path Road, Vijay Chowk, moving on to the South Avenue Road, the rally moved ahead from the Nehru Memorial Museum on the Shanti Path Road, following the PanchSheel Marg crossing the US Embassy and Taj Hotel, the magnificent cars finally reached Ambience Greens, Golf Course, Gurgaon, forming a unique ephemeral museum, showing off their charms with a single aim to be awarded the Best of Show, the “creme de la creme” at the 21 Gun Salute Concours.