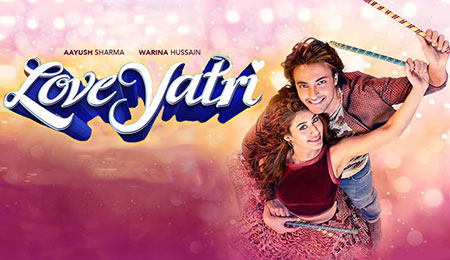 New Delhi;”Loveyatri” is a 2018 Bollywood romantic drama musical produced by Salman Khan under Salman Khan Films and directed by debutante Abhiraj Minawala. It stars Aayush Sharma and Warina Hussain in its lead roles, and was released on 5th October 2018.

Aayush Sharma and Warina Hussain’s Loveyatri made its way to the theatres this Friday and filmmaker Karan Johar, who had watched the film recently, was full of praises for the team. Directed by Abhiraj Minawala, both Aayush and Warina are making their Bollywood debuts with the film. Karan Johar couldn’t stop raving about the cast of Loveyatri and called the film “a breezy delightful love story”.

Salman Khan, who is launching brother-in-law Aayush Sharma in Bollywood with Loveyatri, said in an earlier interview to news agency IANS that he wants the film to be a “big hit”. “We can’t expect this film to be a biggest disaster ever, so obviously we all want this film to be a big hit and that’s what we wish, but only this Friday will tell us whether this film is a hit or not and whether the leading pair and director of the film is appreciated or not.”

In order to record audience’s reviews for the movie, the Ten News team approached three of the PVR cinemas in Central Delhi where every show for the movie “Loveyatri” was cancelled for the day due to lack of audience that is required for screening the movie on the screens of PVR.

Salman Khan produces a Bollywood movie every year where he casts new faces of aspiring actors and actresses. But this year, it looks like Loveyatri will not be as successful as the previous productions by Salman Khan.