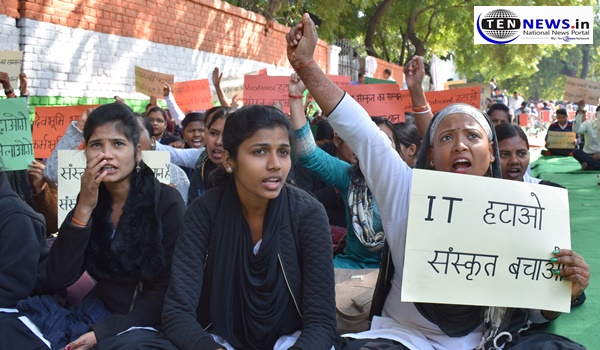 New Delhi : (06/03/2019) Today, Sanskrit Scholar’s from various cornor of india raised voices against, Orissa CM Naveen Patnaik and demanded that , sanskrit subject should be the main language in their curriculum.

They promised to stretch the protest if not heard by government.

Speaking to Ten News students from Sanskrit Union, Orissa shared their opinion regarding this issue.
One guy said, “We won’t stop raising our voice till the day our educational sector will include Sanskrit as a permanent and compulsory language.

One girl who was very angry with government their effort for vanishing Sanskrit language which is the most important and historic language of our nation .

According to her, “Sanskrit is a language that has helped English, the international language to organise some words like Mada : Mother, Bhratri : Brother . If we talk about Aryabhatta, he was the one who polished his career in Sanskrit language and discovered the number Zero. If government won’t include Sanskrit as an official language as soon as possible, we won’t stop protesting and today we are in hundreds and the next step we will be taking will include thousands of us. “