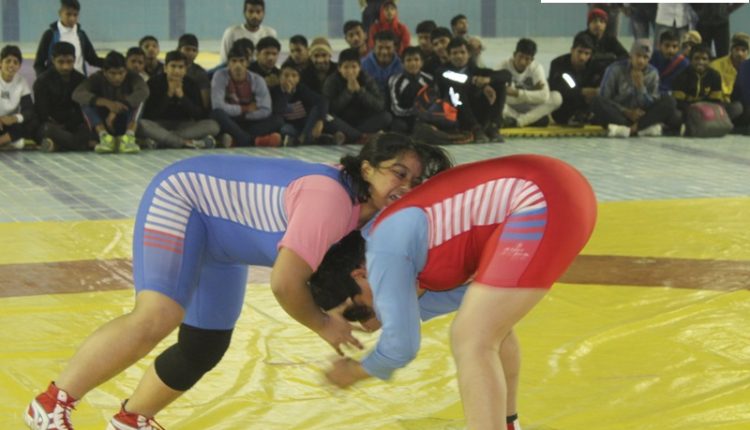 Greater Noida (30/12/18) : 150 wrestler of District, Gautam Budh Nagar, are trying hard to get selected in ongoing selection process in Shaheed Vijay Singh Pathik Sports Complex, Greater Noida. All the wrestler under different weight category were undergoing for this selection process for the upcoming state level wrestling championship to be held in Varanasi from 10 to 14 January. During this selection process Dhirender Singh, MLA, Jewar, also reached sports complex for supporting the players and keeping their moral high. He also interacted with the players, while all this, Secretary of Stadium, Rajesh Kumar, also remained present with him.

A total of 150 wrestlers, both girls and boys are participating in it. Out of which, 30 will be selected for representing the district at state level. Out of these 30 players, 20 will be boys and 10 will be girls. Boys will be playing under both Greco-Roman and freestyle wrestling while girls will only participate in freestyle.

Interacting with Ten News Dhirender Singh told that “There is lot of talent in this region that is yet to be discovered and I am continuously working on it for creating better opportunity. Under Khelo India Khelo scheme I am looking for a land since last three months so that a well equipped stadium can be developed in the rural area on this region.”

While briefing about the event and discussing other aspects of the event secretary of stadium, Rajesh Kumar, International wrestler, Rajhan Bhati, Chtar Singh, Chief Secretary of GBN wrestling federation and Ranjeet Singh shared their views on the same.

Chtar Singh also told that a state level wrestling championship is also proposed in the sport complex from 27 January to 29th January. Now we are waiting for the approval of CEO, Greater Noida Authority. Once we have that permission, Greater Noida will witness a splendid state level wrestling championship. Around one thousand sportsmen will participate in the event which will be very good for the future of wrestling in Gautam Budh Nagar.