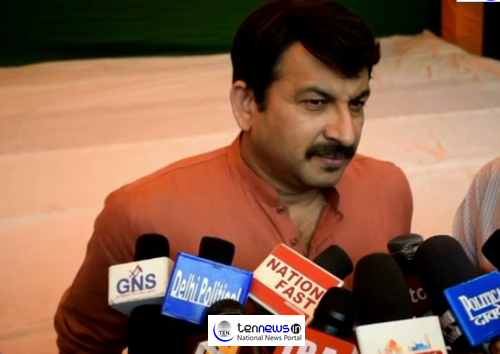 New Delhi: Delhi chief minister and Aam Aadmi Party national convener Arvind Kejriwal inaugurated the Signature Bridge, built on the Yamuna River in New Delhi, on Sunday. The much awaited inaugural of the Signature Bridge in evening was marred by chaos after Delhi BJP chief Manoj Tiwari, accompanied by his party workers, allegedly entered into a scuffle with Aam Aadmi Party workers and the police.

“I was manhandled and pushed. I am very disappointed with Aam Aadmi Party’s behaviour. Is this a way to treat a parliamentarian? Even the police have misbehaved with me. The police is with them, I feel. On live television, it was seen by everybody, Aam Aadmi Party MLA Amanatullah Khan pushed me the whole incident took place in the presence of Delhi CM. I have file an FIR over the incident and Khan’s bail should be cancelled immediately.”

Senior AAP leader Sanjay Singh on the other hand said that, “we did not invite the Chief Minister for the inauguration of metro rail lines to Noida, Bahadurgarh, or Faridabad”. “Kejriwal was also not invited for the Skywalk inauguration at the ITO, which was built by Delhi’s Public Works Department. Now the BJP has come to stage a drama,” Sanjay Singh tweeted.