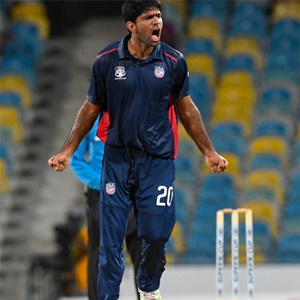 New Delhi : Even after joining Oracle as a software engineer, Netravalkar kept up his passion, driving six hours from San Francisco to Los Angeles during weekends.

Saurabh Netravalkar is an Indian-born American cricketer. He is a left-arm medium-fast bowler who has represented India under-19 team. He made his first-class debut for Mumbai in the 2013–14 Ranji Trophy on 22 December 2013.

Last month, life came full circle for Saurabh Netravalkar. The 27-year-old former Mumbai medium pacer, who had quit the game to study computer science in Cornell University, became the captain of the US national cricket team and now is mentioned as one of the best cricketer in US.

Shende Sisters Enthralls Everyone with Soulful music at India Gate