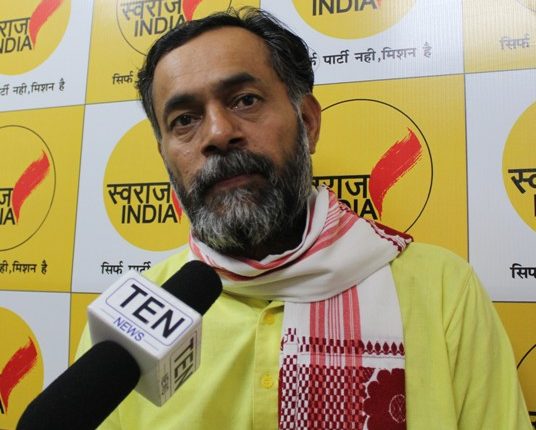 Yogendra Yadav, convenor of Swaraj India, has written an open letter to Prime Minister Narendra Modi, addressing the concerns of hundreds of students protesting against the alleged fixing of the Staff Selection Commission (SSC) exams, held by the Center, since Tuesday, 27 February.

He Wrote, “It is with great pain that I write to you about the ongoing struggle of our young friends – boys and girls – from all over the country demanding a fair CBI probe in what seems to be a scam in the SSC (Staff Selection Commission) exams conducted by the Center. Though our young friends have emerged in thousands to voice their concerns, all they have been met with is a deafening silence from the Central Government. When the entire country was celebrating Holi, this youth was gaping at the darkness of their future.”

Sir, it is an open secret that Staff Selection Commission exams are open to fixing, thereby compromising the merit of the aspirants. In fact, this is the backdoor reservation open to those who can either buy a future of choice or those who have free access to power yielding centers. I have for long maintained that almost every state has a Vyapam of its own and the victims are the young boys and girls who after putting in years of hard work are weeded out mercilessly by the few unscrupulous in the system. It is not just the results that are compromised, dates of joining are also uncertain, most often dating on to 2-3 years from the declaration of results. I find no reason why such uncertainty should be thrust upon the youth at all?

Your address to the country and more specifically your election campaigns were focussed on the employment issues of the Indian youth. You got a resounding victory as the youth believed in you. But now when the youth asks you to intervene, you are found missing in words and action. This is what pains me Modi ji.

I would also like to share what I saw when I visited the protesting youth in Delhi. They were sleeping in worn out quilts on footpath, quite like migrant labourers. They hardly have enough to eat and water to drink but they are staying put. This should move anyone with a love for the future of the country. It moved me! However, your police is seen prohibiting anyone who wants to help these children with food, water, and basic logistics. I urge that you order that basic logistics be made available to the protestors, which is not such a huge thing to do.

Mr Prime Minister, I urge you to intervene in the ongoing stalemate. Please listen to the “Mann ki Baat” of the youth for once. All these young boys and girls are asking is a fair CBI probe and a clean examination system that allows only merit to prevail. In the case of the ongoing agitation, there is prima facie evidence of fraud in the SSC – CGL (Combined Graduate Level) and MTS (Multi Tasking Staff) examinations. It is important that a CBI enquiry be not only conducted in this but also in the entire functioning of these examinations. This is the least we can do for the young protestors.

I am hoping a favorable response from you as the one who leads the youngest nation of the world.

A Mega Yoga Walkathon against Diabetes held in Delhi; more than 6000 Delhiites participated!