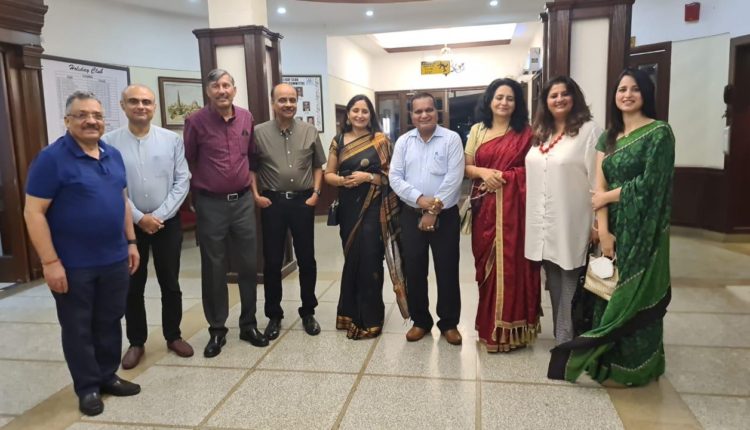 Ten News Network hosted a Moderator’s meet at Holiday Club, Panchsheel Enclave in the capital on July 30’21 to brainstorm on the challenges lying ahead post Covid-2.

It was a much needed get together for the extended Ten News Network family as most of them were meeting face to face for the first time.

Ever since the Corona Pandemic brought life to a grinding halt, Ten News Network (TNN) has been in the forefront by initiating an exhaustive series of stimulating webinars, debates and programs on multifarious issues concerning the common man and the nation on the whole.

Following all the norms of Covid Appropriate Behaviour, the meet was planned to provide an opportunity to different members of the TNN family to express their viewpoints on certain germane issues and the challenges lying ahead post Covid.

The meet planned over dinner saw all the participants chipping in with their invaluable views and suggestions on issues ranging from national to civic, health, socio political, education, infrastructure, economy, inflation, govt. policies and reforms etc. The members deliberated upon the prospects of the outbreak of a third Covid wave, and the country’s preparedness for coping with the unseen enemy that was mutating into new variants.

The participants unanimously concurred that Life Coaches had a pivotal role in society to help people cope with the inevitable stress following the Pandemic.

Speaking on the occasion, Coach Shweta observed, “Since the very outset of Corona, Ten News Network has played a remarkable role in bringing to fore numerous issues that pertain to the well being of the common man through its thought provoking webinars and live sessions. The onus is on the team members now to work cohesively in taking the vision of the founding members to the next level. It is a matter of pride that Ten News Network has carved a distinctive niche for itself in a very short time span. It is indeed a proud privilege to be part of the Ten News Network family, and we are sure that the Network will continuously add new feathers to its cap in times to come.”

The meet saw seasoned visionaries Rajiv Kakria, Rachna Tiwari and Anil Sood suggesting their innovative ideas on how Delhi could be transformed into a world class city. They all agreed in unison that it needed just the right blend of some course corrective measures and the political will to give Delhi an altogether new look and feel.

In the last 16 months of the Pandemic, Ten News Network forum has been the hub of some of the most engrossing and freewheeling interactions and web shows with the presence of participants from all nooks and corners of the globe.

For Ten News Network, it has always been “Nation First”, and the Holiday Club meet, being no exception to the rule, too lived fully upto its core objective.