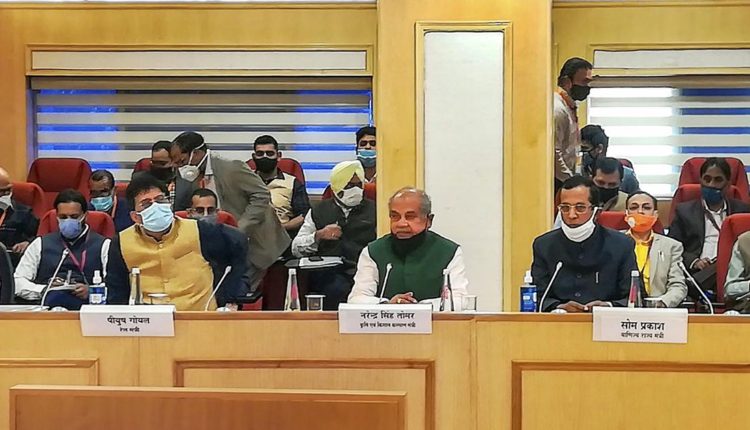 The tenth round of talks between farmer unions and the Central government over the three farm laws began at Vigyan Bhawan in New Delhi on Wednesday.
Union Agriculture Minister Narendra Singh Tomar and Union Minister Piyush Goyal, among others, were present at the meeting.

The talks were earlier scheduled for January 19 and were later postponed to Wednesday.
After the ninth round of talks on January 15 remained inconclusive, Union Agriculture Minister Narendra Singh Tomar had said the unions have been asked to form informal groups among themselves and submit a draft to the government regarding their demands.
Tomar had said the government will think about the draft with an “open mind”.

Saying that the government is concerned about the farmers protesting in cold conditions, he had asserted that the Centre is positive to reach a solution through talks.

On January 12, the Supreme Court stayed the implementation of the Centre’s three farm laws and asked the committee formed by it concerning the laws to submit its report within two months.

The committee has been directed to hold a dialogue with farmers and submit its recommendations pertaining to the farm laws within two months from the date of its first sitting.

However, the leaders of farmers’ unions rejected the committee, saying their members were already in favour of the farm laws.