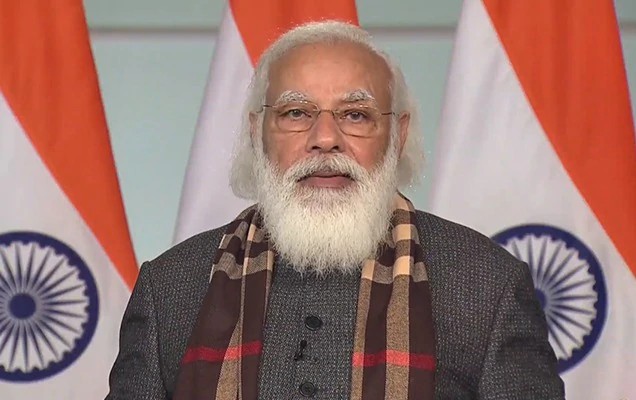 Through railways, we are connecting the areas that were left behind: PM Modi

The Prime Minister, Narendra Modi has said regions of the countries that are unconnected and left behind are being connected through railways connection. Modi was speaking after flagging off eight trains connecting different regions of the country to Kevadiya in Gujarat and inaugurating several railways related projects in the state, via video conferencing.

Prime Minister also asserted that speed of broad gauging and electrification has gained momentum and tracks are being prepared for higher speed. This has enabled running of semi high speed trains and we are moving towards high-speed capabilities, for this budget has been enhanced manifold, said the Prime Minister.

The Prime Minister also pointed out that it is being ensured that railways remains environment -friendly. Kevadiya Station is India’s first railway station to start with green building certification.

He also stressed the importance of aatmanirbharta in railway related manufacturing and technology which is yielding good results now. It was due to local manufacturing of high horse power electric locomotive that India could launch the world’s first double stacked long haul container train. Today a series of indigenously manufactured modern trains are part of Indian Railways, Said the Prime Minister.

The Prime Minister stressed the need for skilled specialist manpower and professionals to meet the requirement of the railway transformation. This need drove the establishment of Deemed Railway University in Vadodara. India is one of the few countries to have an institute of this stature. Modern amenities for rail transport, multi-disciplinary research, training are being made available. Talented youth from 20 states are being trained to steer the present and future of railway. This will help in modernizing railway through innovation and research, Concluded the Prime Minister.