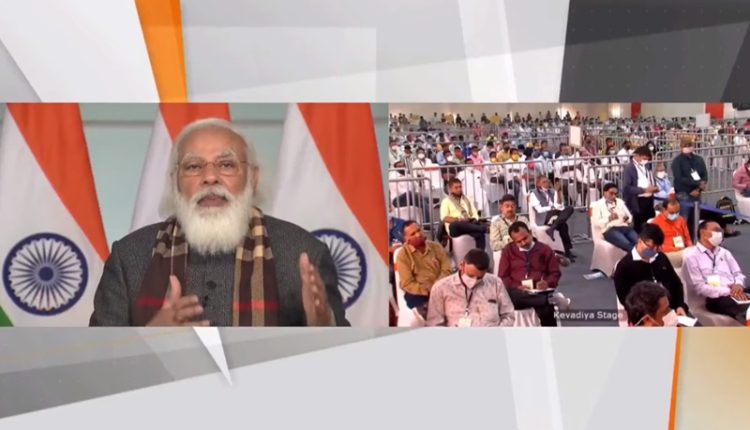 The Prime Minister, Narendra Modi has asserted that Kevadiya in Gujarat is no longer just a small block in some remote area, it has come up as a one of the biggest tourist destination of the world. Modi was speaking after flagging off eight trains connecting different regions of the country to Kevadiya in Gujarat and inaugurating several railways related projects in the state, via video conferencing.

Continuing with the development journey of Kevadiya, the Prime minister informed that Statue of liberty is attracting more tourist than even Statue of Liberty. More than 50 lakh visitor have come to see the Statue of Unity after it was dedicated to the nation and it is catching on after staying closed during the Corona months. It is estimated, as the connectivity improves, about one lakh visitors per day are expected in Kevadiya. Kevadiya as a good example of planned development of economy and ecology while protecting environment, said the Prime Minister.

The Prime Minister said that it used to appear like a pipedream when, initially, Kevadiya was proposed as major tourist destination. Given the old way of working, this scepticism had a logic as there was no connectivity of roads, nor street lighting, rail, tourist accommodation. Now Kevadiya has transformed into a complete family package with all amenities. Attractions here include, grand Statue of Unity, Sardar Sarovar, vast Sardar Patel Zoological Park, Arogya Van and Jungle Safari and Poshan Park. It also has Glow Garden, Ekta Cruise and water sports. The Prime Minister said due to increasing tourism, Adivasi youth is getting employment and local people are getting modern amenities. There are new opportunities for local handicrafts items in the Ekta Mall. He also mentioned that about 200 rooms are being developed for Home Stay in the Adivasi villages

The Prime Minister also talked about the Kevadiya Station which has been developed with growing tourism in mind. It has Tribal Art Gallery and Viewing Gallery from where Statue of Unity can be glimpsed.

The Prime Minister dwelled at length on the transformation of Indian Railways through goal-centric effort. He said that apart from traditional role of passenger and goods transportation, railways is giving direct connectivity to places of tourism and religious importance. He said many routes including Ahmedabad- Kevadiya Janshatabdi will have attractive ‘Vista-Dome Coaches’

Through railways, we are connecting the areas that were left behind: PM Modi