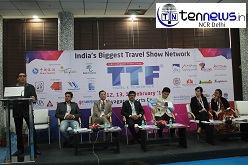 #TTFDelhi2016 showcases the flavour of the upcoming travel season TTF Delhi 2016 showcases the flavour of the upcoming travel season

The show featured over 205 exhibitors from 25 states and 13 countries showcasing destinations and latest travel trends in the three-day exhibition.

Sustainable and Responsible Tourism was the theme of TTF 2016. A workshop on Responsible Tourism was organised on the first day of the show. The discussions commenced with a Vision Statement by Sanjiv Agarwal, Founder and CEO, Fairfest Media, and Editor and Publisher of Travel News Digest. Special remarks were addressed to the audience by Akhtaruz Zaman Khan Kabir, CEO, Bangladesh Tourism Board and Li Qianguo, Director, New Delhi, China National Tourist Office. Members of the travel trade fraternity were further enlightened on Responsible Tourism by panellists who illustrated success stories through audio-visual presentations. Anna Alma Torres, CEO and Founder, Open Eyes Project and Responsible Tourism in India, and A Lajwanti Naidu, Assistant Professor, Amity Institute of Travel and Tourism shared anecdotes of community based tourism projects undertaken by them. Professor Dr Sajnani, Dean-Hospitality and Tourism and Director, Amity Institute of Travel and Tourism stressed on the necessity of investment in skill development, creation of more jobs and on the promotion of local crafts, while Gaurav Bhatnagar, Director, Folktales focused on women empowerment.

The evening on the first day was graced by a Jammu and Kashmir road show at The Lalit, New Delhi. Among the dignitaries present were Secretary-Tourism Farooq A Shah; Director Tourism (Jammu), R K Verma; and Director-Tourism (Kashmir), Mahmood A Shah; CEO of Yousmarg Development Authority, Bakshi Javid Humayun; and Financial Advisor, Jammu and Kashmir Tourism, Manav Gupta. Farooq A Shah announced that an aggressive 360 degree promotional campaign is being launched to create awareness about the mesmerising destinations of all the three regions of the state – Jammu, Kashmir and Ladakh. He also announced that as part of an aggressive marketing campaign, 10 food festivals, travel trade roadshows and golf road shows are being organised in prominent and important leisure and MICE markets. Announcing the new slogan of Jammu and Kashmir Tourism – ‘See J&K in a new light’, he invited all to indulge in the latest attractions of the paradise.

On the second day of the event, at the TTF Conference Hall, Farooq Shah also launched the Jammu and Kashmir Tourism/JKTDC Calendar for 2016, highlighting the beautiful tourism destinations of the state.

Visitors to the TTF got an opportunity to discuss business face-to-face with participants like Cox and Kings, Ethiopian Airlines, Global Odyssey, Kidzania, Lama Tours, L’Orient Travels, Southern Travels, South America Group, The Last Resort Adventure, and many more, among others.

On the final day, the exhibitors at TTF were awarded under various categories for their colourful displays at the show. The complete list is attached.

TTF New Delhi marked the beginning of the TTF Series for the calendar year. Travel and tourism industry has been prioritised by the governments at the federal and central levels as a key economic driver. A positive outlook for the travel industry is expected in 2016. The announcement and expansion of Visa-on-Arrival have been received well by foreign tourists but structural problems like taxation on high-quality hotels have remained a constraint to outprice India in the International markets. Tax-breaks for the tourism sector are well deserved, but the legislative logjam has ensured that these have not been prioritised so far.  The plans for modernisation of the railway system and recent decrease in airfares augur well for the industry.

TTF Delhi was strategically timed when the advance buying and selling of travel products start before the peak summer season.

TTF is a lively marketplace where buyers and sellers of destinations from India and abroad meet face to face. The first day of the show was reserved for travel trade. Entry to the show was free and opened for all in the evening ofSaturday (after 3 PM) and all day on Sunday.

Travel & Tourism Fair, popularly known as TTF, is organised in 10 major cities of India, every year. It is the oldest and the largest travel show network in India, now in its 27th year of inception.

Fairfest Media, the organisers of TTF, is the leading travel media company in India. It’s OTM Mumbai from February 18-20 is adjudged India’s biggest travel show, with more than 1,100 exhibitors from more than 50 countries.