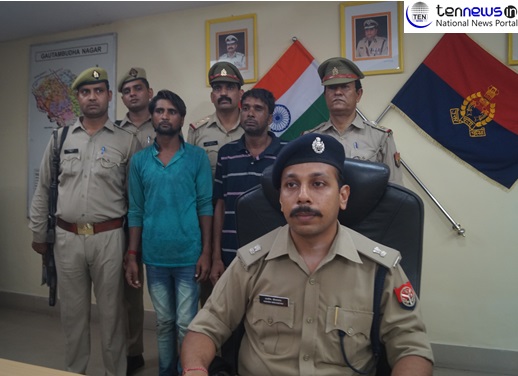 Today Greater Noida police had arrested two criminals regarding a face burnt dead body that was found near divider over the road heading towards Tilpata Chowk to Kasna.

On March 3rd police had recovered a dead body with a burnt face near divider over the road heading towards Tilpata Chowk to Kasna. Latter the victim was identified as Aabid a resident of Dadri. Taking action in the incident today police had arrested two of the accused around 7:50 in the morning over a tip off they received from police informer. While the third accused is still absconding.

Both the accused are identified as Praveen a resident of Bulandshahr and his accomplice Shahid a resident of Dadri. Police had recovered a Knife that was thrown into bushes near Ansal Society around 400 meter away from crime spot. Police recovered the knife over sign of strain given by the accused.

SP Rural, Gautam Budh Nagar Ashish Srivstav told that “Both the accused and the victims use to work as a laborer and also use to attempt robbery. On the day of incident Shadid, Praveen and their accomplice Budha Jatav had murdered the victim over distribution of money they recovered from robbery.”

Further he told that “the accused admitted that “Praveen held the hands of the victim and Abid assaulted him over his head by bricks and mean while shahid silted his throt by knife. Thereafter to hide his identification they burnt his face with acid used in battery and thrown the body into the bushes.”

The accused had a criminal history earlier also and now they are being sent to jail after being presented before court.