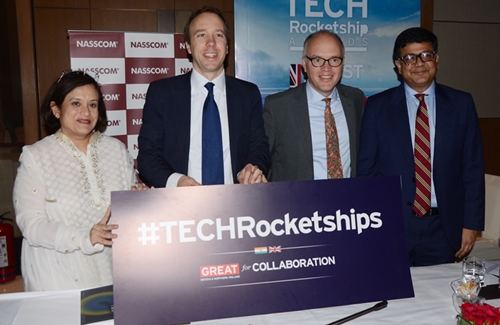 New Delhi: The UK’s Secretary of State for Digital, Culture, Media & Sport, Matt Hancock, today launched the 4th edition of the India-UK TECH Rocketship Awards, in partnership with the National Association of Software and Services Companies (NASSCOM), in the presence of Debjani Ghosh , President, NASSCOM. The awards are designed to help Indian start-ups thrive by giving them access to capital and a platform to go global via the UK. The awards offer a week-long sponsored trip to the UK exposing them to prospective business partners, investors, and incubators during the London Tech Week 2019.

Applications for the program are open from today, and seven winners will be selected from among the seven categories of AI, Big Data, Cybersecurity, Fintech, Med-tech, IoT and a Judge’s Choice Award.

The Prime Ministers of both the countries also announced the India-UK Tech Alliance in London last month, led by NASSCOM and Tech UK to identify and pair businesses, venture capital, universities, and provide access routes to markets for British and Indian entrepreneurs and SMBs. As part of the alliance, NASSCOM launched its FutureSkills platform in the UK with techUK to promote the growth of skills needed for a world where artificial intelligence, machine learning, big data analytics and cybersecurity will be major technology growth areas.

Commenting on the launch,Debjani Ghosh, President, NASSCOM said, “In such disruptive times, collaboration is the key to success, and NASSCOM’s partnership with the UK government epitomizes the possibilities of co-innovation and co-creation between the two nations. India and the UK’s mutual synergies have forged a legacy over the years, and we look forward to deepening the tech connect between our two start-up nations.”

Rt. Matt Hancock, Secretary of State for Digital, Culture, Media and Sport, of the United Kingdom, said, “Carrying forward the joint commitment following the launch of Indo-UK tech Alliance during the visit of PM Modi to London recently, we are happy to partner with NASSCOM for the launch of the Tech Rocketship awards this year. This will help boost innovation and entrepreneurship partnerships between the two nations.”

The congruence between India and UK has previously been reflected through India’s £136m technological investment in the UK, bringing together the technological capabilities of both countries with the aim of strengthening high-skilled jobs and economic growth in both. Indian technology companies, many of them NASSCOM members, account for over 30,000 tech jobs in the UK – just under a third Indian-created jobs in the UK.

Second Phase of Magenta Line to be inaugurated soon, Noida to get faster, convenient connectivity with South Delhi-Gurugram