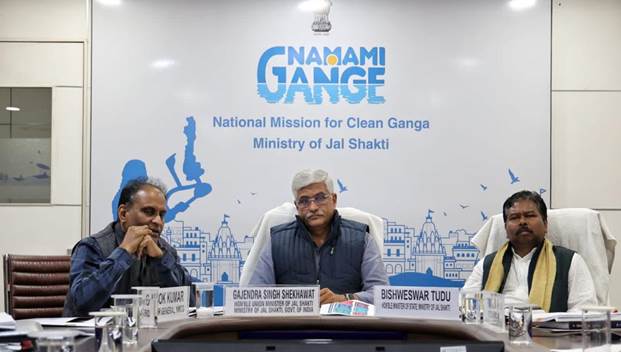 G. Asok Kumar gave a presentation on the thrust areas under Arth Ganga and the activities that have been undertaken in the past few months in the six verticals of Arth Ganga including:

b) Monetization and Reuse of Sludge & Wastewater that envisages reuse of treated water for irrigation and industrial purposes and revenue generation for ULBs,

Asok Kumar informed that following the MoU with Sahakar Bharati, exposure workshops and visits have been organised for several farmers in Shirdi, Bulandshahar, Sonipat, Haridwar and Meerut. The farmers are being nudged and sensitized to shift to Natural Farming and 75 ‘Sahakar Ganga Grams’ will be developed. Ghat Mein Haat initiative has also been launched under Arth Ganga in the Ganga Basin among other activities. Jalaj Livelihood Model has been launched at 26 locations and 15 more will be launched by 31st December.

Among the central ministries, the Ministry of Agriculture & Farmers’ Welfare informed that various steps are being taken to build organic farming and natural farming corridors along River Ganga and eco-agriculture is being promoted besides efforts to improve water-use efficiency in Ganga villages.

The Ministry of Tourism informed that comprehensive plan is being worked out for development of tourism circuits along Ganga in line with Arth Ganga. Also, exhibitions and fairs across 75 towns along Ganga are being planned as part of Azadi ka Amrit Mahotsav. The Ministry of Culture, on the other hand, are planning Sanskriti Yatras along with dedicated Ganga galleries in Museums.

The Ministry of Power are taking steps in the direction of reuse of treated wastewater of thermal power plants by adopting cluster approach whereas the Ministry of Rural Development is actively looking for convergence of activities under MGNREGA for rejuvenation of small rivers and protection of traditional water bodies.

The Ministry of Environment and Forests informed that they are mulling scaling up of afforestation activities in the Ganga belt and a detailed plan to take ‘Project Dolphin’ forward is also underway. A comprehensive list of wetlands is also being developed among other efforts. The Ministry of Housing and Urban Affairs informed that focus is on mapping of urban drains and management of sloid and liquid waste in Ganga towns under SBM 2.0 and AMRUT 2.0 besides operationalizing of planning framework for River Cities.

In the States, the focus in the transition from Namami Gange Mission I to Namami Gange Mission II will be on expeditious completion of projects, preparation of bankable DPRs for projects in Ganga tributary towns, cutting down delays. The States informed that a lot of focus is being given on revival of small rivers and wetlands. For future, each Ganga district is to develop scientific plan and health card for at least 10 wetlands and adopt policies for reuse of treated water and other by products.

The States/ministries were urged to implement activities on Arth Ganga as per the six verticals in coordination with each other. It was also informed that a total 139 District Ganga Committees have been constituted out of which 52 are on the main stem of the River and 87 are on tributaries. Regular, monitored, mandated, monthly and minuted meetings of DGCs are being held now.