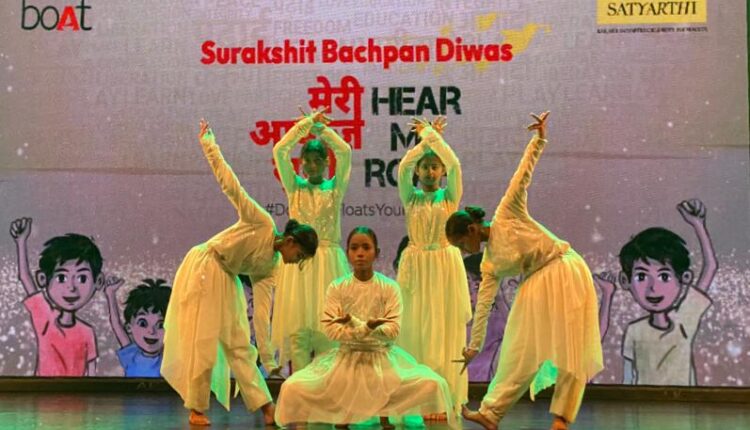 New Delhi, January 11, 2023 “Uski Kya Galti Thi”, these words in the lyrics of the newly released video album by two immensely talented children from Sanjay Camp in Chankyapuri are nerve-wrecking. The lyrics pose serious questions on the rising crimes against children and women across the country. As we mutedly watched the dreaded scene from the Kanjhawala incident on the eve of New Year, the two children through their soulful composition and heart-touching lyrics raised pertinent issues concerning safety of children and women in the colourful event at Shri Ram Centre tonight. The occasion was when enthusiastic children from 8 slums in Delhi celebrated “Surakshit Bachpan Diwas” at a colourful event “Meri Awaz Suno” organized by Nobel Peace Laureate Kailash Satyarthi’s Children’s Foundation (KSCF) and supported by boAt, India’s leading audio and wearables brand. Chief guest at the event Union Minister for Social Justice and Empowerment Virender Kumar inaugurated “Meri Awaz Suno” and released a new video album “Uski Kya Galti Thi”, which was the high point of the evening. “Uski Kya Galti Thi” is created by 17-year old Tilak and 15-year old Ashma from Sanjay Camp in Chanakyapuri, the music video spotlights the rising sexual violence against children and women.
Chief guest Dr. Virender Kumar extolled the lifelong dedication of Nobel Peace Laureate Kailash Satyarthi for children and said, “Everyone lives for oneself but very few live with humanity as their objective. The only objective is to make children’s life happy without being bothered about one’s own health and rest”. Union Minister further said, “When people like Kailash Satyarthi lead from the front, they add new compatriots and their voice is now heard across 143 countries, so that children of those countries will get educated enabling them to make their lives better. When Kailash Satyarthi was conferred with the Nobel Peace Prize, there was a feeling all over the country that the honour has not been conferred on just a person but on the whole country”.
At the event children staged performances like dance, music, and theatre to spread the message on child rights and the importance of creating safe space for protecting children and their childhood. Their performances highlighted the positive changes that KSCF has brought in their communities in the past 4 years through its activities, which ensured and encouraged the active participation of children in the development programmes. Tilak is a first-year commerce student, with dreams of becoming a musician and wants to work as a visa officer after his education. Tilak aspires to take his parents abroad when he becomes capable in future. Ashma is a vibrant girl studying in Class 11 and is a first-generation literate. She dreams of becoming a Chartered Accountant after she completes her education. Music is a passion for her, and she idolizes Nobel Peace Laureate Kailash Satyarthi and hopes to imbibe his values in her life. Both Tilak and Ashma have been very vocal and active members of Bal Mitra Mandal (BMM) in Sanjay Camp in Chankyapuri.
Bal Mitra Mandal (BMM) or child friendly community, is an innovative concept of Nobel Peace Laureate Kailash Satyarthi and was launched in 2018. BMM is a sustainable, holistic, and preventive intervention for child protection and development in urban slum communities so that every child is safe, free, and educated.
KSCF is currently working in 8 slums in Delhi and has succeeded in inculcating leadership qualities in children. Last year, children from Sanjay Camp succeeded in installing a new electric transformer in their area after raising demand for it and persuading the concerned authorities.
Under the “Meri Awaz Suno ” initiative, KSCF supported by boAt had launched a talent hunt programme one year ago to identify and hone the skills of children in four activities like dance, theatre, music, and cricket. The selected children were mentored under professional trainers and the programme this evening showcased their immense talent before the world.
“Surakshit Bachpan Diwas” is celebrated every year across the country to commemorate the birthday of Nobel Peace Laureate Kailash Satyarthi and to ignite and enhance compassion among citizens, regarding children and bring them together to fight against the various forms of exploitation of children and ensure that the world becomes a safe place for them.
The event was dotted with thrilling performances by the children highlighting various issues affecting their lives and the changes that have happened in their communities.
Speaking on the importance of the occasion, Rakesh Senger, Executive Director of KSCF said, “Surakshit Bachpan Diwas brings to fore the essence of creating an atmosphere where all citizens realize the significance of coming together to work collectively towards making the society safe and protected for children and their childhood. Today’s evening spotlights the benefit of educating and empowering children to achieve higher objectives in their own life and in their communities. We as a society must work collectively to ensure their education in order to empower them for greater benefits for our society and nation”.
On the occasion, Aman Gupta, Co-founder of boAt said, “Under the #DoWhatFloatsYourboAt philosophy, boAt aims to create a community of young people who are inspired to follow their passion and encourage themselves through their talent regardless of their background. We wish to empower all our boAtheads to pursue their dreams and become the voice of stories that have gone against the tide to create careers. This program with KSCF is one of the many initiatives that boAt is taking to grow the young talent in India and become a strong influence for a generation that’s continually progressing towards achieving big dreams and living purposefully”.
Colourful events were held across the country like Koderma in Jharkhand on the occasion of “Surakshit Bachpan Diwas”, events including street plays, song and dance programmes, painting, quiz activities, elocution and debate contests were part of the celebration.