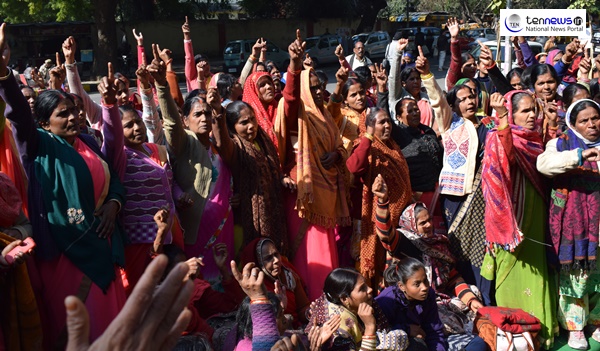 UP Anganwadi Workers’ Association stage Massive Protest in Delhi : Demands 18,000 to be their new salary in accordance with booming prices

“Until our demands, including monthly salary of Rs 18,000 for Workers and Rs 9,000 for Helpers and regularisation of jobs, have not been met, we will continue holding protests and placing memorandums to the Government”, said Ramesh Prakash Rao, President, UP Anganwadi Worker Association.

Prior to this, Anganwardi Workers and Helpers submitted memorandums to PM Modi through BDOs and district Collectors before.

“We were promised to be provided with an increase in our salaries but government proved that promises are meant to be broken. We have hundreds who are facing many challenges due to a less amount of salary.”

“From last many days, we have not been cooking food in our houses. It is obvious that in today’s expensive society, one can’t survive properly in a salary of 5,000”, another woman added.