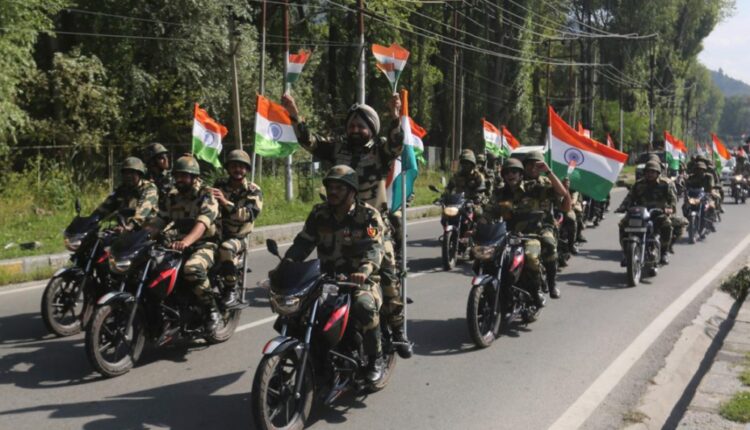 Kashmir, August 11, 2022: While the country prepping up for celebrating the 75th Independence Day with much fervour and gusto, Jammu and Kashmir administration too, is putting it’s best foot forward to make it a grand success.

Preparations are in full swing in Jammu & Kashmir to encourage all citizens to hoist the national flag on August 15th. Centre led Har Ghar Tiranga campaign is going on with full swing to create maximum awareness in the valley.

As part of Azadi Ka Amrit Mahotsav, more and more citizens are being encouraged and motivated to hoist the tricolor flag on India’s 75th Independence Day. Under this initiative, various activities are being conducted by schools and other departments in J&K.

Activities and events such as singing competition, painting, essay competitions, quizzes and debates are being held in every district of Kashmir.

Moreover, flags have been distributed to most household and have also been hoisted at public places, local buildings, markets, gardens, etc.

The Department of Rural Development is also organizing many performances and ceremonies in order to spread the message of India’s freedom struggle, independence and rich culture.

Mean, BSF army jawans also organised a ‘Tiranga Rally’ in Srinagar on August 10th which passed through different parts of the city.
Jammu administration too, is on its toes to make Har Ghar Tiranga event a grand success as 3.5 lakh tricolours will be hoisted from August 13 to 15 across the district.

Underwriting Auction for sale of Government Securities for ₹32,000 crore on August 12, 2022