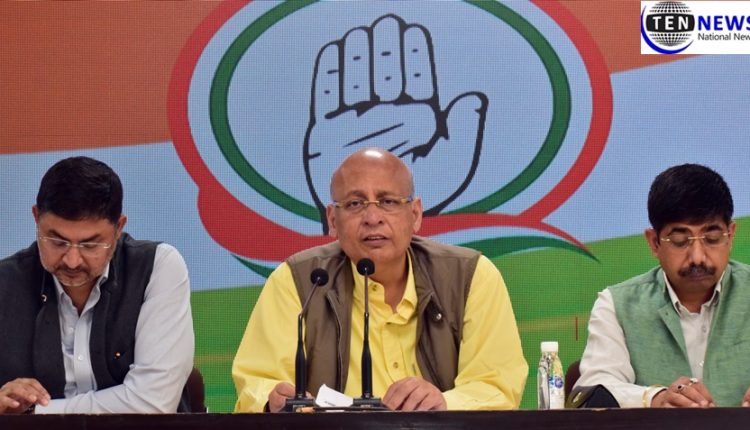 Value of Rupee against Dollar from 58 to 73 in 5 Years : Congress calls BJP big failure on both economic and social front

New Delhi (08/03/2020): The Congress on Sunday claimed that there is a proposal to increase the premiums for insurance and life insurance related to vehicles and the Modi government is engaged in shedding crocodile tears and loosening the pockets of common people.

Party spokesperson Abhishek Manu Singhvi demanded government to stop the increase in premium on insurance and protect the account holders’ capital in banks and control inflation.

He told reporters that two very unfortunate decisions are going to take place in terms of insurance.

Singhvi said that ‘both these increases will affect the middle class and the people below it. He said that LIC controls 70 per cent of life insurance market. It is also proposed to disinvest in this. Government will privatize it on one side and are going to increasing the premium on the other side. What kind of conspiracy is this?’

He said that the price of rupee against the dollar has exceeded Modi ji’s chest and his age. When Modi became Prime Minister in 2014, the value of the rupee was 58 against the dollar, which has now gone up to 73 rupees.

Singhvi alleged that this government sheds crocodile tears on one side and is loosening the pockets of common people on the other side. This government has failed on both the economic front and social front.

He also said that Congress demands that the government intervenes to stop the premium increase in the context of insurance. Account holders’ money should be protected and inflation should be controlled.

Value of Rupee against Dollar from 58 to 73 in 5 Years : Congress calls BJP big failure on both economic and social front
0 174
Share FacebookTwitterGoogle+ReddItWhatsAppPinterestEmail