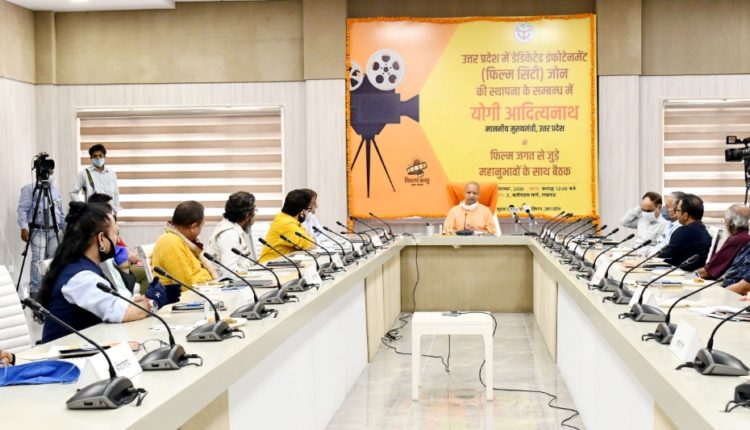 Within days of announcement, the UP government takes concrete steps for setting up the Film City

New Delhi, Sep 22, 2020: Within days of the announcement about the Film City in Uttar Pradesh, the Chief Minister Yogi Adityanath on Tuesday unveiled an ambitious plan to set up a Dedicated Infotainment (film city) Zone and rolled out an open offer to film fraternity to come to the state. He also announced that 1000 acre of land has been identified in Gautam Budh Nagar by Yamuna Expressway Industrial Development Authority. (YEIDA)  where the Infotainment Zone will be set up with all World Class Civil, Public and Technological facilities.

A bevy of film personalities immediately lapped up the prompt action of the state government and said it has been a ‘right step at the right time’. They, in fact, spoke with the Chief Minister who presided over the meeting with them on setting up the film industry in UP.

The Chief Minister said that the proposed site is just an hour away from New Delhi and very close to the proposed International Airport at Jewar, going to be the biggest greenfield airport of Asia. Having also been close to Agra, the city of Taj, Mathura, the birthplace of Krishna and near to the proposed logistic hub in Noida, the proposed dry port and freight corridor thus providing all facilities of transport and movement.

The Chief Minister said UP is surrounded by seven states and provides a mosaic of culture, dialects and the religious, Vedic and mythological  historicity unparalleled to any other state. The ethos and traditions of the state amplify the vast natural and spiritual canvas of Uttar Pradesh.

He said the efforts will be to make this as the best Dedicated Infotainment Zone of the country. He said his government is well aware of the present trend of OTT and Media Streaming Platforms hence the High Capacity, World Class data Centre along with all pre-production and the post-production infrastructure, processing labs, VFX and digital technology of international level will be provided in this zone. “We have locations, we have cultural diversity, and we have man power and now the film city with state-of-the art facilities. This is an ideal case for a Film City in Uttar Pradesh, ”the Chief Minister said.

He said all the policies of Industries will be applicable for the takers and Single Window Mechanism will be used to facilitate those who want to come here and set up their studio. He said the state government’s Film Policy-2018 has already some talking provisions. Even then, if some proposals are forthcoming from the film fraternity, the government will take those into consideration.

The prompt action by the state government immediately received a positive response as the ace Art Director Nitin Desai offered to set up an entire Film City on the lines of what he has been set up in Mumbai. He was of the opinion that about 80 percent of technicians and workforce in Mumbai film industry is from UP and after the industry in UP itself, the availability of manpower will never be a problem. In another offer, Sandeep Singh of Vistas Media, a Singapore based Company, has offered to set up a Film Academy with an initial investment of 10 million Dollars.

Ashok Pandit, the Chairman of Film Producer Association, welcomed the proactive action by the state government and he said one should look beyond Hindi films and even multilingual films can be made here. ‘After all the Bhojpuri films are already made here,” he pointed out.

Veteran actor Anupam Kher said the proposed Film City should have and will have a global recognition. He put emphasis on the training part and asked to evolve some training logistics. Noted Film Producer and Director Satish Kaushik, who recently shot a film Kagaz in UP, said that UP has offered a great alternative to film professionals and aspirants. The vantage location of the proposed Film City caters to a large geography and demography of the Northern Region. Lyricist Manoj Muntasir welcomed the UP government for taking Hindi film industry to Hindi speaking belt. The local ethos and mosaic culture will get a further boost if film institute and music academy are also built in UP, he said.  Saundarya, the film maker from Tamil industry, said that the animation, digital technology and other facilities are needed for the hour and which are already proposed in the Film City of UP. Well known singers Udit Narayan, Kailash Kher and Anup Jalota were all praise for the Uttar Pradesh government and the Chief Minister to carry out such an onerous task in such a short time. Among others who were present during the occasion included Infrastructure and Industrial Development Commissioner (IIDC), Alok Tandon, Additional Chief Secretary, Information and Home, Shri  Awanish Kumar Awasthi, Additional Chief Secretary to CM, S P Goyal, Director of Information, Shishir n other senior officers.