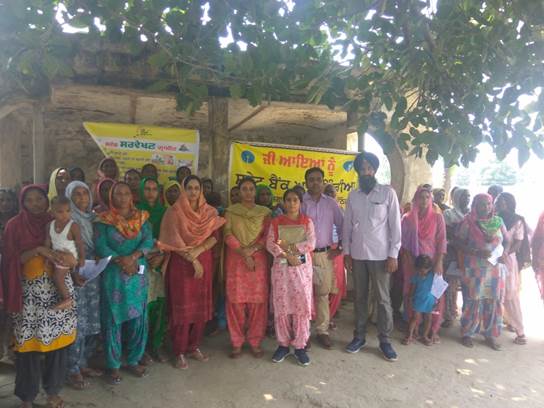 Woman Sarpanch from Punjab leads the movement of ‘water for all’

It’s a typical busy morning for Ms. Kulwinder Kaur Brar. Even as she hurriedly wraps up household chores, her focus is on the meetings ahead. Her day will be hectic as she meets with stakeholders, Government officials, corporates, NRIs and most importantly with her own team. Kulwinder’s life is very much like any other official, with just one exception. She is a village sarpanch from Memha Bhagwana village in Bathinda district of Punjab, who has imbibed the contemporary work style for greater good.

Since childhood, Kulwinder has seen village women suffering due to paucity of potable water in the village. Kulwinder was resolute to change their plight, and soon after becoming Sarpanch of the village, she started working towards the cause but with a smarter approach. Her idea and intent were superb, but to kickstart them, huge funds were required. With the launch of Jal Jeevan Mission, things were much more streamlined and soon the piped water scheme for providing water in every rural household was sanctioned for Mehma village.

To take the mission further, the Village Water & Sanitation Committee (VWSC) members went house-to-house explaining how piped water supply will not only save time and energy but will also provide clean drinking water of prescribed quality. The details of the scheme were informed where in 10% capital expenditure required to be contributed for in-village infrastructure. Families were encouraged to contribute and get a tap connection so that they get more time during the day for productive works. Most people agreed to pay the money towards the installation of the water connection as availability of water was a serious concern. But there were few households in the village who could not afford the contribution. Gram Panchayat took the decision to waive off their charges. The expenditure towards their household tap connections were taken up by the Panchayat. Today, for any new water tap connection the VWSC charges Rs. 500/ from the general household and Rs. 250/ from that belonging to scheduled castes.

The next milestone was to regularly take up water issue in Panchayat meetings. Patriarchy was the main hurdle in implementing this idea.  Although Kulwinder lead the Gram Panchayat as a Sarpanch but there were very few women who actually attended the Gram Sabha. It was a tough task to mobilize the women. Today, nearly 80% women attend the Gram Sabha and share their concerns. Seeing a woman at the helm of affairs instills confidence in women who are more participative and are willing to take leadership roles.

Jal Jeevan Mission’s IEC Campaign was a great help in steering the community. Role of women and their importance in water management was part of the campaign. In order to carry out regular awareness, an all women Village Water & Sanitation Committee was formed in the village since the women in the village believe that it’s the women who run the house, hence, they can manage water better.

Thanks to Jal Jeevan Mission! A silent revolution is happening in villages. The piped water connection has completely changed the lives of women. They are saved from the drudgery of fetching water. With a tap at home, women have more spare time in their lives.  Another visible change is that the dropout rate has reduced since piped water connection has reached the village. A number of adolescents have re-enrolled in the schools.

A five-member committee has been formed in the Panchayat which periodically tests the water source and household tap connection to assess the purity and standard of water supplied in the village. While skilled masons, electricians and plumbers are available in the village for various works related to drinking water supply, now women are also being trained to carry out minor repair worksand maintain the existing infrastructure.

Today Mehma Bhagwana village is a perfect example of community participation and mobilization to own the JJM scheme where the village has 100 percent functional household water connection and running it successfully for a population of 1,484 people, which can be emulated by other villages.

But for Kulwinder Kaur, the journey has just begun, as she now plans to work towards grey water management & installation of solar lights in the village. Under her leadership, she has other plans to see women from her village be economically independent.She is in the process of mobilizing them under the umbrella of SHGs. She says, ‘’I will ensure that these women from the village should take up some gainful economic activity to be financially independent and contribute to the family kitty.’’

The flagship programme, Jal Jeevan Mission is under implementation in partnership with States with the aim to provide drinking water to every rural household of the country by 2024. In the past one year, more than 2.30 Crore households have already been provided tap water connections across the country. As of now, 5.50 Crore households now get assured safe tap water in their homes, i.e. almost 30% of total rural households. In a recent letter dated 29 September, 2020, Prime Minister Shri Narendra Modi has appealed to people and Gram Panchayats to make Jal Jeevan Mission a people’s movement.