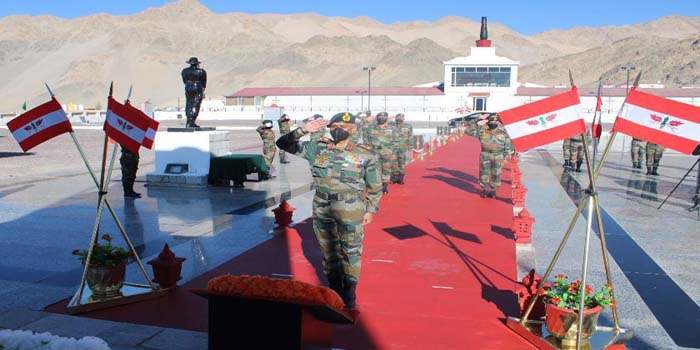 o honour the supreme sacrifice of the Infantry in fighting the Pakistani raiders in Jammu and Kashmir in 1947, the 74th Infantry Day was celebrated with traditional solemnity and gaiety following all Covid-19 precautions.

Major General Navneet Kumar, General Officer Commanding, Dakshin Maharashtra & Goa Sub Area, being the senior most infantry officer in station, laid the wreath on behalf of Lieutenant General CP Mohanty, General Officer Commanding-in-Chief, Southern Command, at the National War Memorial, Pune, in remembrance & gratitude towards all members of the Infantry fraternity, who made the supreme sacrifice for the honour and safety of the nation.

October 27 is celebrated as Infantry Day by the Indian Army as it was on this day that an Infantry Company of the First Battalion of the Sikh Regiment was air lifted from Delhi to Srinagar to liberate Kashmir from the invading tribals who were supported by Pakistan Army. This action was ordered after Maharaja Hari Singh signed the instrument of accession, acceding Jammu and Kashmir to India.

In his message, the General Officer Commanding- in-Chief, Southern Command, complimented all Infantrymen for their devotion towards duty and indomitable spirit while working in trying and uncongenial environment. He acknowledged the tremendous contribution of Infantry in maintaining the sanctity of the nation’s borders. Infantry also popularly known as the “Queen of Battle” is the back bone of Indian Army and its soldier bear the main brunt in any battle. Operations in 1947 bear a testament to the perseverance of the Infantrymen as it was entirely an Infantry centric operation.