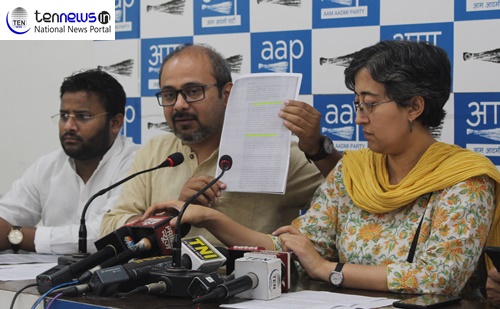 AAP levelled slew of allegations and sought reply from the MCD, LG and Chief Secretary while addressing media today at party office.

Additional Commissioner of North MCD, Renu Jagdev recently wrote a letter to NDMC mayor on May 18, 2018. In the letter she wrote, huge amount has been given to the private individuals on the name of acquiring land for the Rani Jhansi flyover project despite the fact that the land belongs to the government.

“Rs 110 crore has been given to the private companies in the name of acquiring land for the Rani Jhansi flyover project by the LG and MCD. Thought, the land belongs to NDMC which is being proved by the Additional Commissioner Renu’s letter,” said AAP leader Dilip Pandey.

As she raised the issue before the authority concern, she is being transferred by the LG, however, Rani Jhansi flyover project is pending since 1998, and appears to have turned into a means of channeling funds to the BJP.”

In addition to that, the most shocking of them all is the transfer of 95 acres of land belonging to the MCD to the DMRC without the approval of the municipal body. The land, which is valued at over Rs 15,000 crores by conservative estimates, is currently being developed by a private builder.

Speaking in the event, AAP leader Atishi Marlena said, “The officer made several attempts to flag this issue, but was punished by being relieved of her charge as Additional Commissioner. This entire episode raises serious questions on the role of the BJP leadership, the L-G and senior bureaucrats who relinquished claim of Rs 15,000 crores worth of land belonging to the MCD leading to windfall gain to a private builder.”

“The Aam Aadmi Party will not permit the blatant loot of public money and will expose the BJP’s corruption in the time to come,” she added.

CBI has registered an FIR in SSC paper leak case