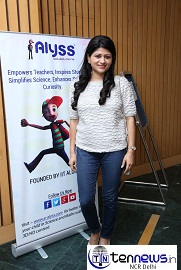 An evening was hosted to unveil a new era in Science Learning through “ALYSS” product by Infinite Solutions, a simple and efficient method of visually illustrating science concepts in 3D HD animations for the schools and homes. Founded by an IIT alumnus Dr. Chunduri Rama Mohan with a focus on creating a strong passion for Science and Maths, ALYSS (Animation Lab for Young Science Students) is pioneering introduction of a new era in Science Learning. They bring explanation of science concepts in native 3D HD animations to the schools and homes.

Some of the esteemed guests who were present on the occasion were Floral and Set Designer Abhishek Kaushik, Interior Designer Parull Mahaajan, Ratan Kaul, Designer Parull Grover to name a few.

Dr. KIRAN BEDI, Recipient of Ramon Magsaysay Award, Ex IPS officer who was the Chief guest for the occasion  said “ I congratulate ALYSS and its team for designing a content specially designed to enhance the scientific temperament of students while improving their grades in school (Board Examinations) and performance in competitive examinations (Medical and engineering entrance tests).

Dr. Chunduri Rama Mohan (Founder of Alyss) received his Bachelors, Masters and PhD in department of computer science and engineering from Indian Institute of Technology (IIT) Kharagpur. He completed his PhD in 1994. He has worked as researcher in semi-conductor domain in USA upto June 2011 when he relocated to India. He has published more than 20 papers in different VLSI/CAD areas and has been a chairperson for IEEE conferences; He has been a robotics coach for children in US and India and led the teams to participate in FLL competitions. He has strong passion in science and technology.

Should CBI uncover the IB: #ArunJaitley