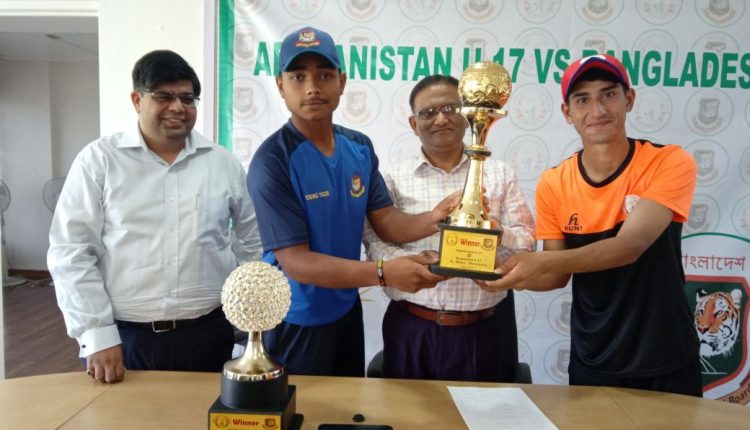 A trophy launch for the upcoming under-17 cricket series between Afghanistan and Bangladesh was held today at Greater Noida Stadium.

During the trophy launch captain and coaches of both the teams were also present.
Series will have two 3 day test matches and 3 one-day. Test matches will be from 13th March to 22 March with a gap of one day in between.

The 3 one day matches will be from 24 to 28th March. Matches will be played in Greater Noida’s Shaheed Vijay Singh Pathik Stadium and will have no entry charges for the audience. The general entry for the audience will be through gate-2 and cricket lovers can enjoy the matches on the above mentioned dates starting from 10:00 am onwards.

Interacting with media caption of Afghanistan said that we are pretty confident about our performances. This is our home ground so we are used to this ground conditions and it will help our spinners.

Both the teams expressed their pleasure about the ground condition and said that it would be a neck to neck competition where the young cricket players of both the countries will compete to win the trophy. The matches are expected to be very high scoring given the nature of the pitch which was termed batting pitch by both the teams.

#SSCProtestUpdate: Protest enters 14th day at CGO complex Students say, neither SSC nor the government is thinking for us!