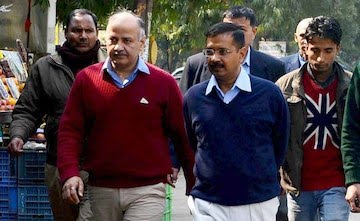 New Delhi: Chief Minister Arvind Kejriwal on Saturday said all of Delhi will march to Raj Niwas if he does not clear the CCTV project. Addressing a rally in Bawana, he said, “Do politics, but not against people and their development… else people will rain shoes on you (janta aise joote maregi) The BJP’s L-G is sitting on CCTV files; he is saying he won’t let the CCTVs be installed.”

Earlier, Deputy Chief Minister Manish Sisodia attacked LG, “For three years when we were working on this project, the LG was silent. Suddenly now when the tender has been allotted he sees loophole in the system. The chief minister along with all Delhi Ministers and AAP MLAs will walk to LG house to discuss the issue,” said Sisodia.

Kejriwal Tweeted, “All ministers and MLAs will walk upto LG house from my residence on Monday at 3 pm to urge Hon’ble LG not to follow BJP’s directions and to allow CCTV cameras to be installed all over Delhi to strengthen women security.” In Conversation with Dr. Sushma Malik, Principal Sheoran International School, “We Believe in philosophy of Play, learn, Innovate and Experience”