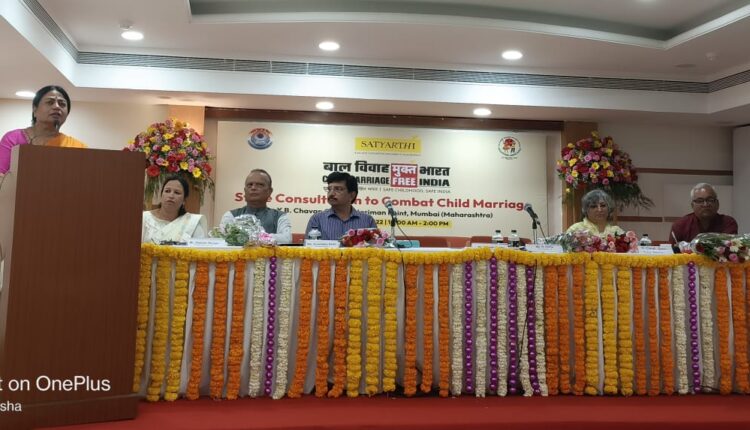 Mumbai: The richest and the most developed state of India, Maharashtra sees a steady rise in child marriages in the recent years. According to Census 2011, around 11.6 lakh children were married off before turning 18 years, which constituted approximately 10% of all married children, ranking 4th in the country. Furthermore, National Crime Records Bureau (NCRB) 2019-21 reports, during the last 3 years, the number of victims of child marriage in Maharashtra has climbed up from 20 in 2019 to 82 in 2021. With an objective to curtail the menace, Nobel Peace Laureate Kailash Satyarthi’s Children’s Foundation (KSCF) announced their upcoming “Child Marriage Free India” campaign in Mumbai today. In this regard, a state consultation was held to mobilise all stakeholders of child protection to move together and help in the realisation of Child Marriage-Free India. KSCF co-organised the consultation with Maharashtra State Legal Services Authority (MSLSA) and Maharashtra State Commission for Protection of Child Rights (MSCPCR). KSCF began nationwide consultations after the recent appeal by Kailash Satyarthi for a sustained campaign across the country to make India child marriage-free.

At the state-level consultation the key points discussed were appointment of Child Marriage Prohibition Officer (CMPO), mandatory FIR registration in cases of child marriage and incentivization of parents to motivate them to not marry their under-age children.

The National Family Health Survey-V (NFHS 2019-21) reports that nationally 23.3% women between the age group of 20-24 were married off before attaining the age of 18. The NCRB data however, suggests that cases of 152 children were registered in the state under the Prohibition of Child Marriage Act (PCMA) during 2019-21 period. This means there is gross under-reporting of child marriages in the state and this needs to be addressed to stop the evil practice and create fear of law amongst the culprits indulging in such crimes.

In this background, the consultation deliberated on pertinent issues linked to child marriage and legal applications to stop the evil practice. Among the key issues discussed in the consultations included mandatory registration of FIR in cases of child marriage to ensure appropriate action takes place, linking child marriage with Juvenile Justice (care and protection) Act and POCSO Act for penalising the perpetrators of crime. Further, it was deliberated on appointment of CMPO at the district level across the country and adequate and proper training to the official and incentivization for the parents.

Speaking on the occasion, Chairperson, MSCPCR, Susieeben Shah said, “Child marriage is a tradition in many parts, so awareness must be created. We must also stress on awareness amongst the parents and people to prevent such cases. All departments including government agencies and civil society should be encouraged to act in the prevention of such cases”.

Secretary, High Court DLSA, RD Patil said, “Nalsa’s services should be used effectively to create awareness on the law so that people from different strata are aware of the legal provisions”

Commissioner, WCD, R Vimla said, “We know the problem of Child Marriage but now we must look at the appropriate solutions. Women self-help, government schemes like Kishori Yojana must be used and skill of girls should be enhanced for their future engagement. Men must also be included in the awareness programmes to make it more holistic”.

Chairperson, CWC-Mumbai, Milind Bidwai said, “The problem is widespread in street children and tribal communities. The issue affects the mindset of children and many children prefer to stay at shelter homes due to their torture in homes. Mindset must be changed and school attendance of children must be monitored to prevent the problem”.

Member of Advisory board, KSCF, Yogesh Dube said, “Being ranked 2nd in child marriages is not a good sign for Maharashtra. Similar to how all stakeholders are working to implement “Beti Bachao Beti Padhao”, all departments must work collectively with small targets to stop child marriages in the next three years”.

Highlighting the adverse impact of child marriage on children and why we must act to stop the social evil, Executive Director, KSCF, Rakesh Senger said, “Child marriage is a social evil that continues in our society and should be looked as a crime against children. It hinders the complete development of children. All stakeholders like government bodies and law enforcement agencies must make collective effort to stop the practice. In this regard, our organization under the leadership of Kailash Satyarthi will work closely with the state government, law enforcement agencies and civil society groups towards a child-marriage free Maharashtra”.

Galgotias University set to foray into online & distance education with…