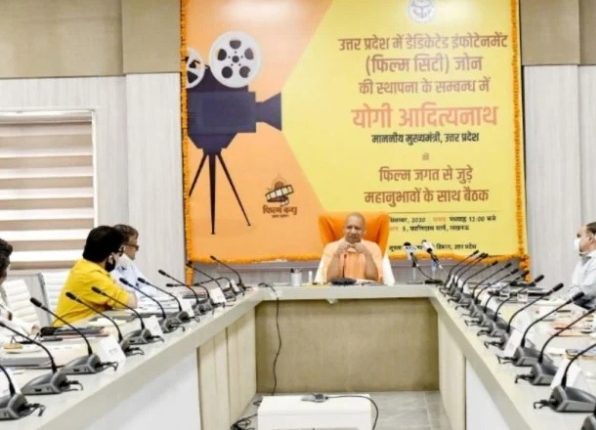 In line with UP Chief Minister Yogi Adityanath’s ambitious project to set up India’s biggest film city in Uttar Pradesh, a marathon meeting was held in Lucknow where over two dozen representatives from the Bollywood joined through video conferencing.

During the meeting, the Chief minister held discussions over constructing a film city in the state and stated that approximately 1,000 acres of land has been identified for the project.

According to a press statement from the Uttar Pradesh government, this 1,000 acres of land have been identified in Gautam Buddh Nagar by Yamuna Expressway Industrial Development Authority (YEIDA) where the Infotainment Zone will be set up with all World Class Civil, Public and Technological facilities.

The Chief Minister said the proposed site is just an hour away from New Delhi and very close to the proposed International Airport at Jewar, going to be the biggest greenfield airport in Asia.

Chief Minister Yogi Adityanath said the efforts will be made to make this as the best Dedicated Infotainment Zone of the country. He said his government is well aware of the present trend of OTT and Media Streaming Platforms hence the High Capacity, world-class data centre along with all pre-production and the post-production infrastructure, processing labs, VFX and digital technology of international level will be provided in this zone.

“We have locations, we have cultural diversity, we have the manpower and now the film city with state-of-the-art facilities. This is an ideal case for a film city in Uttar Pradesh,” the Chief Minister said.

According to a press statement earlier, the Chief Minister said the country needs a good film city and Uttar Pradesh is ready to take this responsibility.
“We will prepare a film city, for which the region of Noida, Greater Noida and Yamuna Expressway will be good,” he had said.
This film city will provide a good option to film producers and it will also help in generating employment. For this purpose, an action plan should be made soon, the Chief Minister had said.