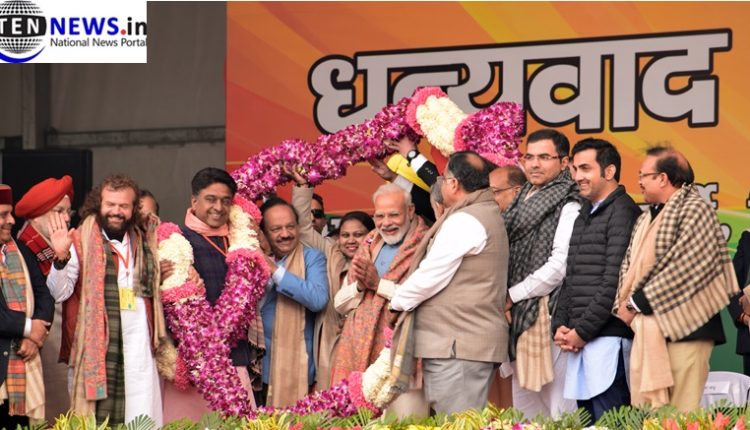 New Delhi (22/12/2019): Prime Minister Narendra Modi addressed a rally today at the large Ramlila Maidan, a little over a kilometre from Old Delhi’s Daryaganj that was hit by violence during a protest against the amended Citizenship Act.

The PM was welcomed by Delhi BJP chief Manoj Tiwari at the venue, along with other senior functionaries of the party. The rally was organised by the party to thank the Prime Minister for the decision of regularising unauthorised colonies in Delhi.

“My rivals should burn my effigy if they hate me but they should not target the poor”, said Prime Minister Narendra Modi.

He further questioned and said, “I want to ask the people who are spreading false rumors about CAA, did we ask anyone about their religion or political beliefs when we took the decision to authorize the unauthorized colonies in Delhi?”

“Hindus, Muslims, Sikhs, Christians all were befitted, everyone who lives here was benefitted. Why did we do this? Because we live for the love of the country. We are dedicated to the mantra of ‘Sabka saath, sabka vikas’. The 130 crore Indians have no connection to the CAB. A lot of lies are being spread about NRC as well. It was made during the Congress regime. Where were the protesters then? We did not make it, nor did we bring it to the Parliament or announce it”, said PM Modi at BJP’s massive rally in Delhi’s Ramleela Maidan.

He further questioned those who are all reasons behind violences happening in the nation and said, “33,000 policemen sacrificed their lives for peace and security in country, since independence. Today, you are brutally thrashing them. When any problem arises, police don’t ask your religion or caste, whatever the weather or time they are there to help you.”

“In the last five years, Government has built over 1.5 crore houses for the poor. We didn’t ask for their religion. We just helped the poor and needy. Allowing the problems to persist is neither our tradition nor our political style of functioning. Even several decades after Independence, a large section of population in Delhi had to face fear, uncertainty, deceit and false electoral promises”, added Prime Minister.