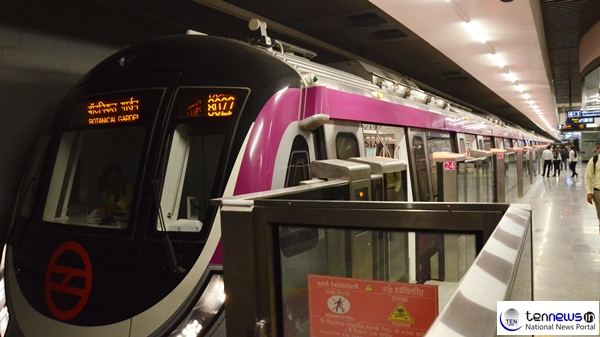 New Delhi: When city is boiling at 45 degree and daily commuters are being forced to stay at home, Delhi Metro Rail Corporation (DMRC) has brought relief to them.

DMRC has announced to open its most awaited route from Kalkaji Mandir to Janakpuri West metro corridor of Magenta Line from May 29, 2018.

Delhi Chief Minister Arvind Kejriwal and Union Minister of Urban Development, Hardeep Singh Puri will flag off the metro on May 28 at 4 pm.

The 36-km long stretch of Magenta Line starts from Botanical Garden (Noida) to Janakpuri West (West Delhi). Of which, metro services between Botanical Garden to Kalkaji (12.2 Km) has already been started since December 2017. Prime Minister Narendra Modi and UP CM Yogi Adityanath had flagged off the service.

According to DMRC, it is the longest stretch opened so far by the corporation of Phase 3. The 24.82 km long section comprises of 16 stations including four interchange facilities at Hauz Khas (With Yellow Line), Janakpuri West (Blue Line) Kalkaji Mandir (Violate line), Botanical Garden (Blue Line – Noida) and IGI international airport. After this, the entire Delhi Metro network will increase to 227 KM with 202 metro stations.

While addressing media at Hauz Khas metro station, Executive Director, Corporate Communication DMRC, Anuj Dayal  said, “Kalkaji Mandir to Janakpuri West was the toughest project Delhi metro has because most of stations are underground and some of the stations lies 29 meter down.”

“With this route, the travel time between Nodia to Gurugram reduced to hald-an-hour. This route directly connects Noida to Gurugram, IGI airport and west Delhi. We are expecting 1.48 lakh passengers every day,” he added.

“DMRC allotted 24 trains for this route and with the frequency of each train will be 5.15 minute. Moreover, we with this route we are connecting education hubs like JNU, IIT, Jamia and Amity universities.”

The Hauz Khas Metro station has been turned into an interchange station to facilitate interconnectivity between the HUDA City Centre Samaypur Badii (Line 2) and the Janakpuri West and Botanical Garden Metro corridors.

After the inauguration of this vital link, the approximate time to commute between HUDA City Centre and Botanical Garden will be about 50 minutes. Presently, a Metro journey from HUDA City Centre to Botanical Garden in NOlDA takes about one and a half hours with the interchange at Raiiv Chowk. There will be paid area to paid area connectivity between the new and the old Hauz Khas stations.

See the glimpses of new Magenta Line Metro stations, functional from May 29