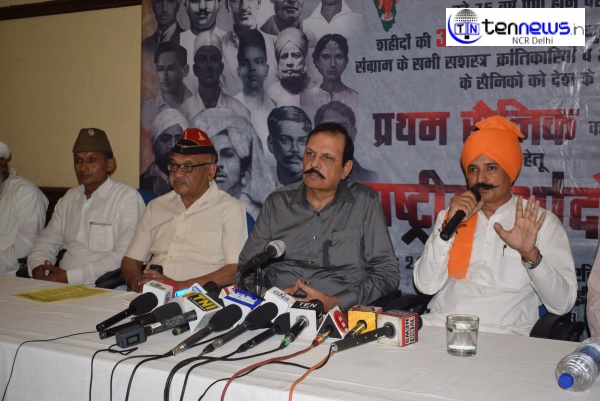 New Delhi: Today at the Press Club of India, Shaheed Bhagat Singh Brigade held a press conference in the presence of the descendants of the freedom fighters of India. Abhay Singh- nephew of martyr Bhagat Singh- the successor of Subhash Chandra Bose and members from the families of other martyrs were present at the conference.

People from Shaheed Bhagat Singh Brigade discussed a lot about the very wrong decisions of some government officials which were taken before independence and how these decisions had a very bad impact on our current society we live in.

“Bhagat Singh was a true leader and a man of his words. After the decision by the British government that was hanging him to hang till death, he refused to get hung but instead asked to get killed by a bullet in the head, because he took that to be the perfect death for any revolutionary.

On 28th of September, a student from Coimbatore sked his school’s principal to celebrate the birth anniversary of Bhagat Singh, which the principal refused. Opposing the decision by the principal, the student organised a small function in the school itself, for which he was suspended on 1st October. Is this the country we live in?”

“I would like to talk about Gandhi. Sorry I wouldn’t call him Mahatma because I personally think he didn’t do anything because of which he should be called Mahatma.
Yesterday, on the occasion of Dussehra when 100s of people died celebrating Raavan Dehan in Amritsar, I pray for them and may they rest in peace.

Jawahar Lal Nehru once ordered to kill 9000 INA soldiers at a place and after the severe deaths of these Indian soldiers, when people asked to construct a memorial for them, a Jute Research Centre was constructed at the place at a very fine pace. We remember Raavan as an evil soul who himself was a man of his words and never even touch Seeta Mata after kidnapping her but we never talk about the one who were the main involvements in Draupadi Cheer Haran.

We as a society has to change the way we think.”