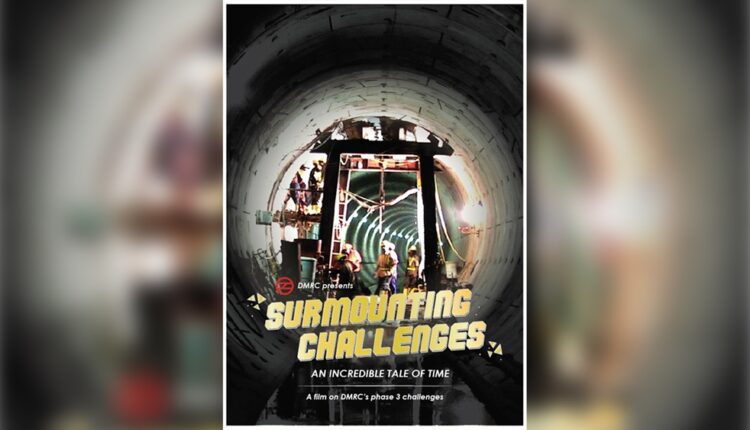 The 28 minute long film deals with the various construction related challenges faced by DMRC during its third phase of expansion. In Phase 3, DMRC constructed about 190 kilometres of new lines and had to encounter innumerable challenges such as construction in the congested old Delhi localities, passing through an extremely busy road intersection at Ashram and constructing Delhi Metro’s deepest station at Hauz Khas.

With the help of new age graphics and interviews of the engineers who executed the difficult project, the film brings to light the massive effort put in by DMRC to expand the Metro footprint in the National Capital Region (NCR). The making of the film in itself was a meticulous task as thorough research on the challenges faced had to be done by a dedicated team of officials followed by recording of hours of interviews of the engineers.

Extensive shooting of the various locations along with retrieval of relevant archival footage had to be done to make the film a reality. Anticipating the making of the film, the entire construction process was documented in the form of videos and photographs for about 5 to 6 years across all under construction corridors since the commencement of the work.

Along with editing and other post production requirements, the making of the film took over a year’s time. It is also an important document for transit rail engineers and researchers as it sheds light on a variety of issues that construction of such mammoth infrastructure encounter.

This is the second time that a film made by DMRC has received such recognition. A film on the engineering challenges faced by Delhi Metro during its Phase 2 had also won the National Award in the ‘Best Promotional Film Non-Feature films’ category in 2012. ‘The Dream Fulfilled – Memories of the Engineering Challenges’ had won the prestigious ‘Rajat Kamal’ award and was conferred to the film by the then President.

The film was earlier screened in the prestigious Indian Panorama section of the 52nd International Film Festival of India (IFFI) to be held in Goa from the 20th to the 28th of November, 2021.

It is indeed rare for films of such nature to get such prestigious awards and screenings. DMRC has always tried to archive its work in the best possible way so that the record remains for posterity in the public domain.

Exhibitions like IHE are a boon to the industry, and a wonderful platform for networking: Rajesh Chowdhury, founder, FSCAI