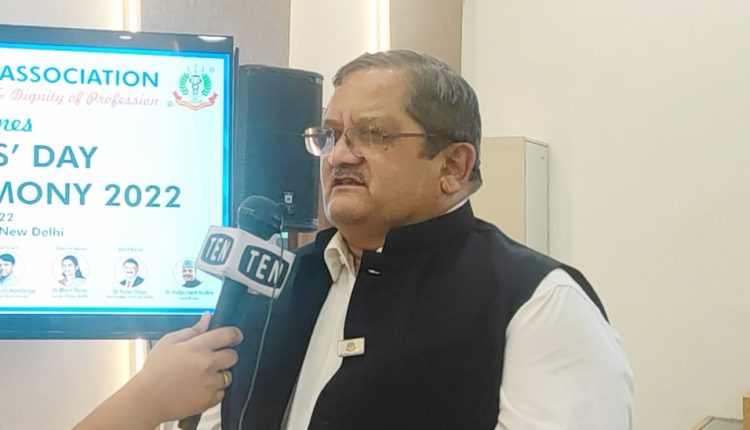 At the ceremony, the Secretary-General of the Indian Medical Association – Dr. Jayesh Lele in conversation with Ten News Network explained that all awardees for the ceremony are chosen as per criteria across the states. Approximately 25 awards were given at the ceremony. “The awardees were chosen based on their seniority and their hard work. Certain upcoming doctors were also awarded based on the work they have done in their local vicinity,” he added.

Dr. Lele also stated that the B.C. Roy Award has not been presented for the last four years. The B.C. Roy Award is the highest honor a doctor can achieve in India presented by the President of India on National Doctors’ Day. He also explained the demands and issues the medical system had with the Central Government of India.

He highlighted the issue with the Consumer Protection Act case, “During the recent amendments it was said in the parliament committee meeting as well as during the discussion that health establishments should be excluded, but unfortunately, that word has not appeared on the excluder list,” he stated.

“Doctors should be legally and very well protected. That needs to be rectified,” he added.

Additionally, Dr. Lele addressed the problems with the Delhi State Government stating, “We are expecting a good amount of relief for smaller nursing homes because they are the backbone of society. Because the friendly neighborhood doctor, who is a solo practitioner, or maybe a family practitioner, gives full-time with minimum or compromise kind of workload and that is neglected by the government,” he explained.

“With the corporate culture, the Sharecare hospitals are coming up, but everybody cannot afford that, which are being taken care of by solo or small nursing homes, maybe about 50 beds, so the relief for the 50 beds is not being given by the government,” he added.

While addressing the recent release of the 9th edition of Indian Pharmacopoeia, he stated “we will go through that complete page-by-page. And we will see that no generic names or other names, whether they are appearing or not.” He also claimed that the IMA will see to it that the pharmacopeia is catering to mixopathy.

Towards the end, Dr. Lele said, “Doctor’s profession is a noble profession. There are still doctors who are doing ethical practice, those are the ones who really support the system and we are going to support and help them whenever they are in need.”

Constitute a Committee for Mixopathy, Whatever it’s decision is we will accept it : Dr. Shahajanand Prasad Singh, National NP, IMA HQ