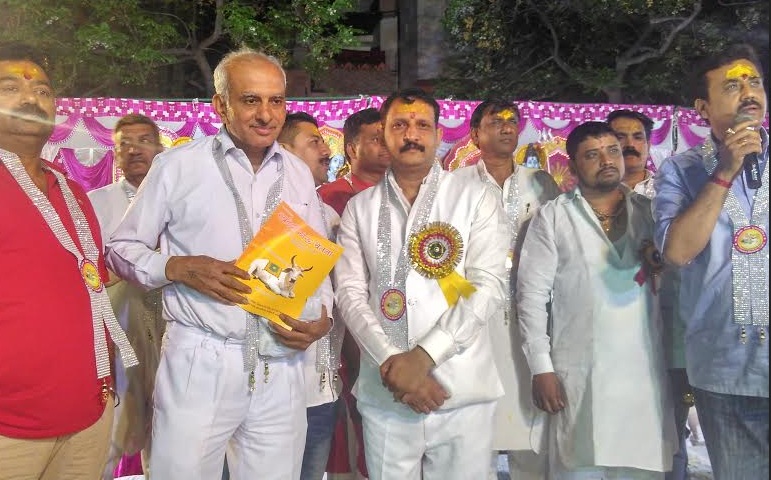 The event had a distinctive charm to it as it was organized to hail and recognize the painstaking efforts of myriad cow devotees who had contributed significantly to better the living conditions for holy cows all over the country. Whether it was improving the infrastructure of gaushalas at different places all over the country, or providing quality drinking water and fodder alongside quality healthcare facilities to the sick and the injured cows, every minute to major effort of cow lovers was duly recognized by the Gau Grass Sewa Trust. The cow devotees and lovers were felicitated on the dais by the eminent personalities. A special mention was made about activists that had played a pivotal role in safeguarding cows from getting slaughtered at different times and different places.

Addressing the large gathering of guests, special invitees and crusaders, Yogesh Bhati, the founder of Gau Grass Sewa Trust said, “As we complete two years of our existence, we feel overwhelmed with the response to our initiatives. The size of our family is only growing bigger with every passing day, and we have been successful in spreading mass level awareness about the problems concerning our Holy Cows. It is ironical when people refer to them as ‘stray cattle’ as the onus actually rests on the cattle owner to not only prevent them from straying, but also ensure their safety and better upkeep. Cattle owners have to be educated about the perils of keeping their cattle away from fast paced traffic, as well as about the grave need for providing them adequate space and fresh air. We are committed to working in tandem with the government authorities at the state level as well as at the centre to ensure better living amenities for cows. Use of cow milk and ghee must be encouraged, and we must refrain from the use of polythene bags as they kill cows. One must inculcate a virtue of either donating to Gaushalas, or adopting a cow in the nearby Gaushala by paying for their upkeep. The objective is to indulge in some Gau sewa or the other. Like any other festival, we must celebrate Gopashtami too with all devotional fervor. I thank all the guests and the devotees for lending their invaluable support and time for this relevant cause.” The timing of the program coinciding with the Holi festivity celebrations added all the more resplendence to the event. Mellifluous melodies were sung by different devotional singers in honour of the Holy Mother Cow which is widely regarded as the ‘Universal Benefactor’. The event saw an impressive gathering of eminent personalities, social activists, politicians besides devotees from all nooks and corners of the city.

Noted activist Sukhpreet Malhotra while commending the accomplishments of the Gau Grass Sewak Trust added, “Plaudits all the way to Yogesh Bhati for spreading widespread awareness about making citizens more sensitive towards the basic issues concerning cows. It is inspiring to see him working passionately in aligning more and more like minded beings to his organization. I am confident that the Gau Grass Sewa Trust family would be much bigger in size when we meet next year. I wish them good luck and feel honoured to pledge all my support.”

In her speech, Sudha Bhardwaj, the national women president of ‘Rashtriya Brahman Yuvjan Sabha’ and president of ‘Kalka Maa Dharmarth Sangathhan’ said, “We are pledged to the noble cause of providing better living conditions for our Holy cows. Due to the unrelenting efforts of activists like us, a ban on cow slaughter in some states has been enforced. Our endeavour is to ensure a permanent ban on the slaughtering of cows in the country. I would urge people of all religions as well as politicians across the political spectrum to support the need of banning cow slaughter. We have been requesting the government authorities to revamp the infrastructure around Parshuram Kund so that the place acquires a heritage look, thereby facilitating a hassle free pilgrimage for the devotees. The potholed roads need urgent carpeting. One of the most burning issues that need to be urgently addressed is the inadequate fodder for a large population of 600 cows at this pilgrim spot. Likewise we have identified many other places in the country where cows are being subjected to sub standard living conditions. I would urge my fellow brothers and sisters to motivate the corporates, the industrialists and the business houses of their constituency about the significance of adopting some gaushalas as part of their Corporate Social responsibility (CSR). ‘Collective responsibility’ is the need of the hour and everyone present in this gathering must contribute in their distinctive way towards ensuring the well being of our ‘Holy Mother’. Eminent activist of the city Subhash Sethi stressed upon the need for organizing more events and seminars for increasing awareness towards the plight of cows. In his brief speech, Sethi pointed, “Cow is regarded as Holy Mother because they provide us with milk. Cow milk has numerous health related benefits and is also considered ‘Amrit’. Sardonically despite being aware of the vast benefits that the cow milk offers, ill treatment is still meted out to cows. Since cows have always played an important role in the economic prosperity of the nation, the time has come to incorporate innovative ways of giving encouragement to new research methodologies for protection of cows, and for enhancing the overall productivity. Emphasis should be on launching more private institutes such as the National Dairy Research Institute (N.D.R.I), Karnal in the country. The concept of ‘Gobar Gas fuel’ must be implemented widely as it has far reaching benefits compared to other conventional and modern fertilizers for the world citizenry.”

A lavish Bhandara arranged by the Trust was served to the guests throughout the evening. The event ended on a positive note as everyone unanimously pledged their time and support towards the cause of cows.