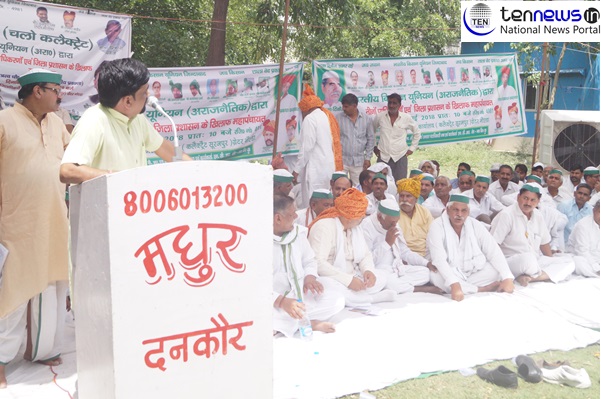 Today Bhartiya Kisan Union had organized a Mahapanchyat to highlight the grievances that they had against the development authorities and district administration. They had alleged that authorities are  harassing farmers by not dispersing right compensation on time.

They also alleged that abolition of district panchyat system has been very counter productive for development of villages and they have turned into slums. During the Mahapanchyat farmer leader Rakesh Tikait was also present and addressed the gathering. He said “authority has to be accountable to the farmers and they had to fulfill the demands of farmers. We want 64.7% of the additional compensation which was already directed by Supreme Court”.

He further said, “Authority is also encroaching over the land which was left for farmers and the farmers didn’t even receive any compensation for that. Now authority is giving notice to such farmers who are doing construction over such lands under section-10. So this should be stopped and farmers must be allowed to stay their legally.”

Many other farmers present at the protest site alleged that land of four villages Jaganpur, Afzalpur, Atta Fatehpur and Dankur falling under Yamuna Expressway Industrial Development Authority is totally acquired by the authority and even after 4 years no single farmer has been given additional compensation.

BKU also threatened that if these demands are not fulfilled, the protest may turn more aggressive.