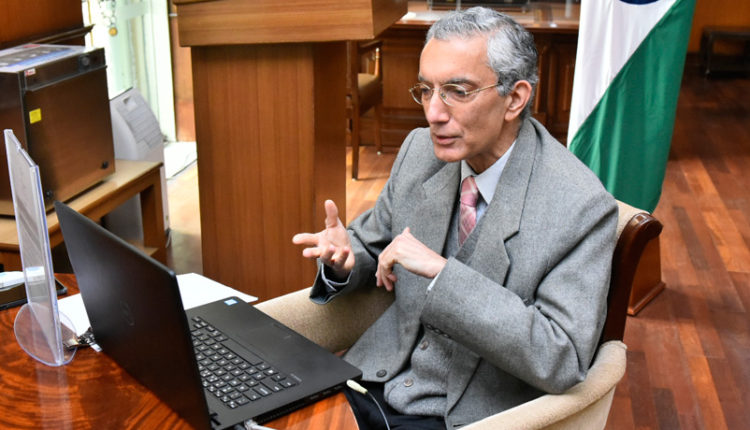 Rahul Chhabra, Secretary (Economic Relations), Ministry of External Affairs, Govt of India today said that after the India – Africa summit, the MEA had committed lines of credit of USD 6.5 billion, USD 700 million of grants and over 50,000 scholarships to African students that have already been given out.

Speaking at the curtain raiser of Diplomacy Unplugged, a dialogue series between India and partnering nations initiated by FICCI, Chhabra said that the Ministry of External Affairs (MEA) has been working on development partnerships with various countries and has started various initiatives as well as was continuing its human-centric globalisation and welfare program with partnering countries.

“We have been trying to finalise migration and mobility agreements with partnering countries. This pandemic threw up the issue of global shortage of trained manpower in various sectors that the MEA has taken note of,” said Chhabra. “We have also started getting the states involved in our outreach in terms of promoting exports and incoming foreign business delegation. Not just in terms of cooperative federalism, we are also looking at competitive federalism,” he further added.

The MEA has enhanced the trade promotion budget along with promoting study in India in various countries. “The MEA has been providing funding for trade fairs and exhibitions and for number of targeted initiatives to Indian missions across regions,” said Chhabra.

HE Vincenzo de Luca, Ambassador of Italy to India said that we are entering a new phase of relations between Italy and India after the successful virtual bilateral summit between the Prime Ministers of the two countries on November 5, 2020.

“We were able to finalise a number of agreements not only on G2G, but also with the private sector. This only goes on to show how the two countries want to transform their partnership to ideally benefit from their economic, innovations and technological complementarity. The two countries also share a global agenda,” Ambassador de Luca added.

Further on the existing relations between both the countries, Ambassador de Luca said that the two countries signed many important agreements during the pandemic. “This was also the first time that a new five-year plan of action had been decided to deepen cooperation in the domain of culture, innovation and technology with the Indian government. The comprehensive partnership between India and Italy helps the companies to be more confident about investment in the two countries,” he added.

We are experiencing a momentum for a very important breakthrough relationship between both the countries after a period of less intense dialogue. Over the last three years we have increased the bilateral trade by 22 per cent. This is a remarkable progress, Ambassador Luca underlined.

Uday Shankar, President, FICCI said, “The whole world is trying to emerge economically, socially, and psychologically from the over-arching impact of pandemic, it is important that we engage formally and informally. The role of economic diplomacy assumes ever increasing importance in the current scenario.”

“Formal engagements and interactions lead to desired outcomes only when they are strengthened by a comprehensive and continuous, informal and unofficial engagement so that there is a better understanding and a greater confidence building and mutual appreciation, “Shankar emphasized.

Further, Shankar noted that Italy has taken over the presidency of the G-20 this year and India is poised for the same in 2023. “This is a huge opportunity for both India and Italy, not only at diplomatic but also at B2B levels to enhance and take our relationship to greater heights,” added Shankar.

Elaborating on the series, Devin Narang, Senior FICCI Executive Committee Member, Convenor of Diplomacy Unplugged initiative & Country Head ? India, Sindicatum Renewable Energy Company said that Diplomacy Unplugged was a member-driven dialogue series, where we would virtually meet the Diplomats and High Commissioners of India’s key economic partners so that the Indian industry could explain the issues they face both in investments overseas and to also address problems that companies from foreign countries might face in India. “This is a common platform that is aimed at increasing investments in India and its partnering countries,” he said.

Dilip Chenoy, Secretary General, FICCI, while delivering the vote of thanks said that FICCI believes in partnership efforts and looks forward to hosting the dialogue series with other nations in the days to come.

The curtain raiser was followed by the first meeting of the Diplomacy Unplugged initiative between HE Vincenzo deLuca, Ambassador of Italy to India and select representatives of Indian companies doing business and or invested in Italy.