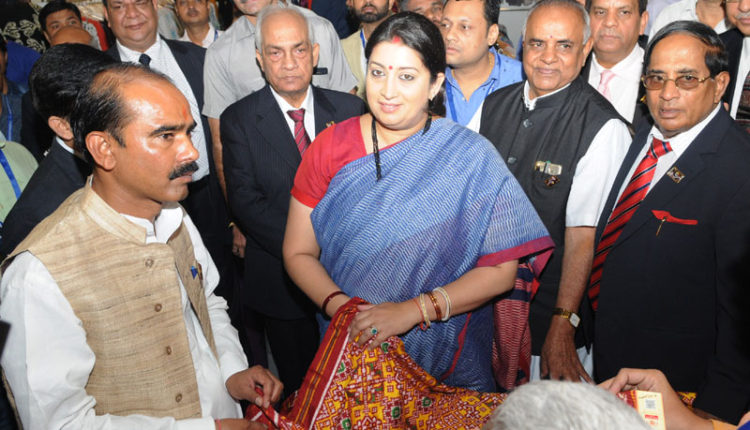 NEW DELHI/ BENGALURU, 23 February 2021: Smriti Zubin Irani, Union Minister of Textiles and Women & Child Development Government of India today said that the recent Budget has brought cheer to the textile industry with the announcement of seven mega textile parks. Additionally, INR 10,000 crores have been dedicated by the Govt of India for PLI schemes, specially dedicated to MMF and technical textiles.

Addressing the inaugural session of the Karnataka VastraTek – Apparel & Textile Conclave organised by the Department of Handloom and Textiles, Govt of Karnataka in association with FICCI Karnataka State Council, Irani elaborated on the growth of the silk sector in the state, Irani said that Karnataka reigns in the realm of silk. “Under the Silk Samagra Program, the Govt of India dedicated specifically over INR 2,000 crores for the development of silk. I am hopeful that the industry gives the state of Karnataka ideas, proposals or initiatives that can make our country Atmanirbhar in silk. We in the Ministry of Textiles are looking at the next two years to ensure that India is self-reliant in the space of silk,” she said.

“Just reducing the produce line to saris and garments would be doing a great injustice to the potential of the silk sector. We are aware that silk, especially the waste of a cocoon can be used by pharma and cosmetic companies. We are hopeful that industry captains can suggest usage of silk waste to help elaborate our production line or elaborate our diversification prospects,” Irani added.

On the future of textiles in the state of Karnataka, the Minister said that the MSP operations for cotton procurement by the Cotton Cooperation of India has touched over INR 359 crores in the state. “From 2014-15 to this year, the Ministry of Textiles has extended support of over INR 1,622 crores only for cotton procurement and MSP operations benefiting over 1.67 lakh farmers,” she said.

Highlighting the importance of the handicrafts sector, the Minister said that Pehchaan Cards were distributed to over 26,000 artisans. The latest handloom census has brought to light that there are over 50,000 weavers in Karnataka who are looking at new opportunities digitally to expand their markets. She further suggested that on lines of the GeM portal that has brought on-board over 1,50,000 weavers from across the country, a similar digital opportunity is given to the marketing of artisans and weavers of Karnataka.

The textile and the apparel sector were tested as an industry during the COVID times and we rose to that challenge nationally and internationally by becoming the second largest manufacturers of PPE suits. “The fact that we could turn around our manufacturing processes in less than 60 days to meet the immediate need of our country speaks volume and is a testimony to the talent of the textile industry,” she added.

Shrimanth Balasaheb Patil, Minister of Handloom and Textile & Minority Welfare Department, Government of Karnataka said that the state was first state to implement a dedicated textile policy and has been an inspiration to other states in the country for the same. The Doddabalapur Integrated Textile Park is the first integrated textile park of the country spread across 48 acres of land and has over 85 units focused on weaving, warping, among others and has generated employment for over 8000 people.

“The Govt of Karnataka is committed to providing world class facilities with easy access to railways, airports and ports for the smooth export of goods and materials. The new Textile and Apparel Policy 2019-2024 has been formulated keeping industrial requirements in mind and the incentives provided is the best in the country. With constant monitoring, the sector will be able to tide over the difficult situation induced by the pandemic,” he said.

“Very few countries can boast of robust textile value chains that India has. Karnataka has been one of the key states of apparel and garment supplies to both domestic and international markets and the textile industry occupies key position in terms of its contribution to the state’s economy. The policy intervention by the Govt of Karnataka have created thriving manufacturing clusters.” he said.

The FICCI Karnataka State Council has been taking sector specific initiatives to improve industry performance. For the textile and apparel sector we are forming a subcommittee with leading garment manufacturers and this will certainly help to bring more vibrancy, he added.

Dr A Sakthivel, Chairman, Apparel Export Promotion Council (APEC) said that with the support and help extended by the Centre during in the last year, India became the second largest manufacturers of medical textile.

“Karnataka plays a vital role in apparel exports and does about INR 17,000 cr worth of exports per year. The state govt should utilise the PLI scheme and promote MMF garments in a big way, he said.  There is a need for plug and play facilities for apparel manufacturing and processing, he suggested.

Speaking on the industry’s role, R D Udeshi, President, Reliance Industries Limited said, “The time has come for the industry to come forward and be aggressive for reinvestment and become one of the major manufacturing hubs in the global arena. We, as an industry, have proved ourselves during the pandemic. From importing PPE suits to manufacturing and exporting the same, this has proved that the industry has the willpower and manufacturing excellence.”

Jacob John, President – Premium Brands, Adithya Birla Fashion & Retail Limited said that the retail sector is pleased to see business bouncing back after a prolonged crisis induced by the pandemic. “With the steps taken by the govt, we expect business to attain normalcy by Q2 of FY22,” he said.

Siddhartha Agarwal, Co-Chair, FICCI Karnataka State Council and Managing Director, Bhoruka Park Private Limited delivered the vote of thanks and said that the conclave had been organised against the background of the new state textile policy unveiled by the Govt of Karnataka.