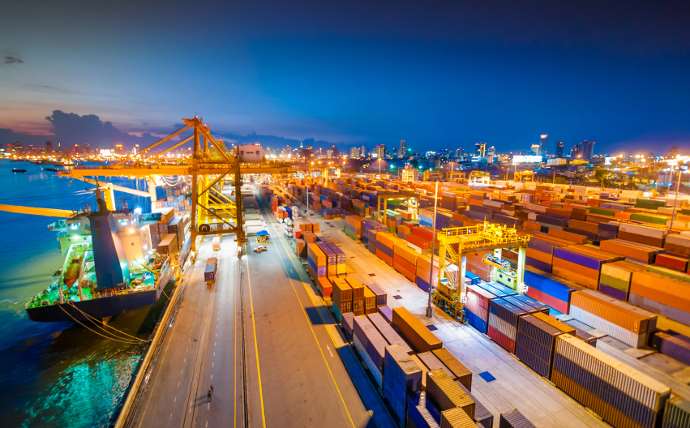 The shipping industry is the backbone of the development and growth of every country in the world, and India is no exception to it. The statistics and economic reports of the country reveal the impact of sea ports in india. The major ports serve as the workstation of the international trade industry. Among the developing countries, India boasts the largest merchant shipping fleet in the world. Considering all these aspects, the government of India also launched a National Maritime Development Programme for expanding the port capacity to a minimum of 3,200 MMT.

India hails with 12 major ports and 205 legally registered intermediate and minor ports. Traders and shippers need to have sufficient knowledge about the major seaports in india. To read more about the leading ports in India, click here.

Maritime transportation is the largest medium of trade in India.

The reports of the Indian Ministry of Shipping claim that over 95 percent of India’s trading as per volume and 70 percent as per value is through maritime transportation. The largest sea ports in india play a very important role in generating these numbers. The right use of technology is also contributing to the development of trading services.

If a trader takes a complete interest in the development rate of major Indian seaports, he can easily identify business opportunities in the industry.

The Top 3 sea ports in india

Out of the 12 major ports in India, the following three ports are placed at the top spot as per performance, expansion and prospects.

The Jawaharlal Nehru Port is hailed as the largest, oldest and busiest sea port in India in terms of cargo traffic. 56% of containerized cargo in the country is handled by JNPT which is the highest of all. It has a custom house, 30 freight stations and a strong connectivity reach to 52 inland ports in India. It largely caters to the employment requirement of East Mumbai. The local people also refer to it as “Nhava Seva”. The major commodities that are transported from this port include sporting goods, pharmaceuticals and textile machinery.

The Chennai port is crowned as the second major sea port in India. It has also secured the 86th position in the list of “largest ports in the world”. In its 135 years of service, the port has made a considerable contribution to the economic development of Tamil Nadu and South Chennai. It also enjoys the service association of countries like Singapore, Thailand, Malaysia, and China among others.

The Mundra port earns the third spot on this list given its accomplishments and development over the years. It is the first Indian port to handle 100 MT (Million Tonnes) of cargo. Being the largest private port in the country, it has given a commendable contribution to the growth and expansion of maritime transportation in India. Mundra port has a warehouse capacity of over 137 thousand square meters. The owners are also developing the port for various leading sectors of the country including Agriproduct processing and textiles and apparels.

The performance of major sea ports in india has been extremely beneficial for the Indian economy. The port sector has been registering significant growth over the years with more and more support from the government and leading investors of the country. There is no doubt that international traders are on the bright side because of it. With new ports coming into play and the infrastructural upgradation of the older ones, the overall contribution of sea ports to the Indian economy is also going to increase.

How to conduct the Bet 365 login right now

Is India moving towards acceptance of adult products?