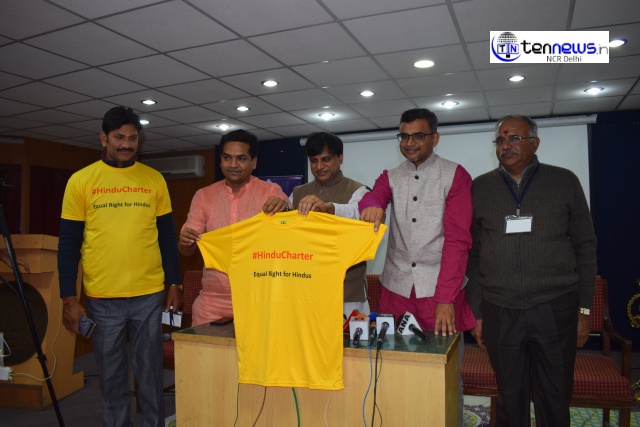 New Delhi : Today, Hindu Charter Press meet was held in the national capital where over 100 Hindus from all over India met and called for a ‘Just and Equitable’ move for ‘Equal Rights for Hindus’ , on par with other communities. The last meeting resulted in a Charter of several demands.

They demanded beef to be totally banned in India as India is today one of the major supplier of beef.

They also spoke about Ayodhya Mandir Dispute, and said that Supreme Court is playing with the expectations and beliefs of Hindus .
According to Kapil Mishra,

“Supreme Court has always disappointed hindus in Ayodhya dispute, SC is just hanging around with the judgement that a common Indian is waiting so it should soon declare the construction of Ram Mandir .”

“Jamu & Kashmir is day by day getting severe on terrorist activities. Jammu is a place where people are uselessly getting involved in these activities and Ladakh is place that consists of majority of Hindus and is declared as a hub of terrorism after Kargil attack. Terrorists majorly enters from the boundaries of Kashmir and make Jammu and Ladakh to be used for various activities. So we have now introduced a demand of separating these three places as different states. ”

Kapil Mishra delivered another demand of Hindu Charter which is,
Guaranteeing Citizenship to the persecuted people, practicing Indian origin religions (Hindus, Sikhs, Jains and Buddhists), by Enactment of a New Citizenship Act Bill and withdraw all amendments to existing citizenship act bills.