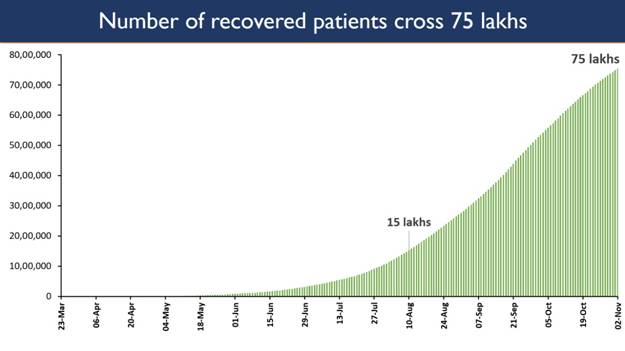 India continues to occupy the top global position as the country with the maximum number of recoveries. The total recoveries have crossed 75 lakhs today (7,544,798).

53,285 recoveries have been registered in the last 24 hours in the country.

The Active Cases comprise only 6.83% of the total positive cases of the country.

India has demonstrated an exponential increase in the number of COVID-19 cumulative tests since Jan 2020. Expanded testing has led to early identification and appropriate treatment. It has crossed the landmark of 11 crore (11,07,43,103) total tests today.

The country’s testing capacities have multiplied manifold with 2037 labs across the country and with collaborative efforts of the Centre and State/UT governments.

Higher number of recoveries is also reflected in the continuous increase in the national recovery rate, which is at present 91.68%

78% of the new recovered cases in the past 24 hours are from 10 States/UTs. Kerala and  Karnataka has contributed the highest number to these with more than 8,000 cases. Delhi and west Bengal follow with more than 4,000 cases.

45,321 confirmed cases have been reported in the last 24 hours in the country.

80% of the new cases are concentrated in ten States/UT. Kerala surged to first place with 7,025 new cases while Delhi and Maharashtra, both reported more than 5000 daily new cases.

496 deaths have been registered in the past 24 hours.

22% of deaths reported yesterday are from Maharashtra with 113 deaths followed by West Bengal with 59 deaths.