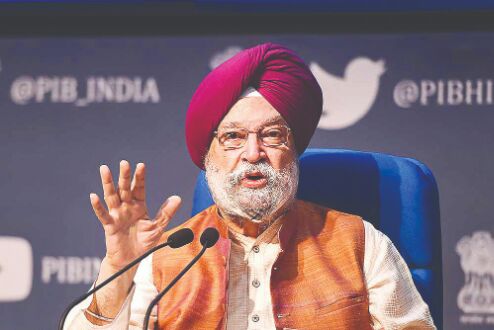 “Diesel prices, which in India between December 2021 and December 2022 rose by only 3%, went up by 34% in the USA, 36% in Canada, 25% in Spain and 10% in the UK. There was a massive impact due to the Central excise cuts announced by the Hon’ble Prime Minister in May 2022 and November 2021, amounting to Rs. 13 per litre of petrol and Rs.15 per litre on diesel cumulatively, along with significant VAT rate cuts by many Indian states. Govt. of India intends to increase India’s exploration acreage to 0.5 million sq. km. by 2025 and 1.0 million sq. km. by 2030. The Govt. has been successful in reducing the ‘No Go’ area by 99%, opening .91 million sq. km. of acreage; we have also established the National Data Repository (NDR) and plans are afoot for a cloud-based and AI/ML-powered National Data NDR 2.0.”, he further said.

India increased the ethanol blending in petrol from 1.53% in 2013-14 to 10.17% in 2022 and advanced its target to achieve 20% ethanol blending in petrol from 2030 to 2025-26. The phased rollout of E20 will commence on 1st April 2023. The Govt. is also setting up five 2G ethanol biorefineries in the country at Panipat (Parali) in Haryana, Bathinda in Punjab, Bargarh (Parali) in Odisha, Numaligarh (Bamboo) in Assam and Devangere in Karnataka.

The Centre has also increased the rate for Compressed Biogas (CBG) plants under the SATAT scheme from Rs. 46/kg to Rs. 54/kg and is taking steps to ensure bio manure produced during CBG production is bundled with fertilizers like urea. IOCL has developed an innovative and patented stationery, rechargeable and always kitchen-connected indoor solar cooking system, which has replicability in India and globally.

Govt. of India is investing Rs.19,744 crores into the National Green Hydrogen Mission for developing green hydrogen production capacity of at least 5 MMT (Million Metric Tonnes) per annum. India’s petroleum refineries constitute the majority of demand for the fuel, and MoP&NG will aggressively pursue green hydrogen to support the development of the nascent industry. OMCs are targeting the installation of Alternate Fuel Stations (EV charging/ CNG/ LPG/ LNG/ CBG etc.) at 22,000 Retail Outlets by May 2024.