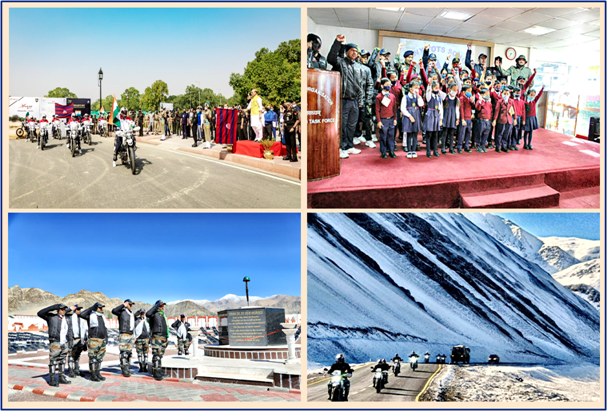 India@75 Border Roads Organisation (BRO)motorcycle expedition, which was flagged off by Raksha Mantri Rajnath Singh from National War Memorial in New Delhi on October 14, 2021; completed its first leg by covering 3,050 kilometres in less than nine days. In the second leg, which started on October 24, 2021, the expedition has reached Jammu.

While adventure was one of the aims of the expedition, the team was also able to achieve the other objectives of promoting message of national integration, nation building and road safety awareness among the masses. A number of outreach programmes were organised at Sundar Nagar and Manali in Himachal, Nyoma, Pang, Hanle, Leh and Kargil in Ladakh and then at Srinagar. The team interacted with the local citizens and tourists, building bonds and spreading the message of road safety. The enthusiastic local populace joined hands with expedition team and collectively carried out cleanliness drive promoting message of ‘Swachh Bharat’ at Manali, Leh, and Kargil. The team got the opportunity of interacting with BRO/Ex-Servicemen and Gallantry Award winners.

The team also interacted with the youth and young school children at Sunder Nagar in Himachal Pradesh and Leh in Ladakh and distributed school bags &stationery items, sharing with them ideas and experiences.  The team also established a cultural connect by joining locals of Kullu district in celebrations of the world famous Kullu Dusshera and then visiting the Bhima Kali Mandir and Thiksey Monastery. They paid obeisance to our fallen heroes at Kargil War Memorial.

The first leg of the 20,000 km long expedition was action-packed and undoubtedly one of the most challenging legs. As the expedition gained momentum and altitude, the men and the machines were tested to the hilt, the team members endured sub-zero temperature (up to -25°C), Heavy snow blizzard, slippery roads and low oxygen levels at super high altitudes and every man in the team showed exemplary grit, courage and intent in taking the expedition forward through the difficult and challenging phases.

The BRO expedition team received overwhelming support, hospitality, encouragement, affection and warmth from the locals at every phases of the expedition, team members also radiated bonhomie, reciprocated love and made good friends enroute and finally handed over the baton at Srinagar to the next team. The second leg will further pass through Chandigarh, Rishikesh, Tanakpur, Praygraj, Varanasi, Bodhgaya, Patna, Bhagalpur and will finally culminate at ‘The Gateway to North East” Siliguri, West Bengal, on November 04, 2021.